Katrina Kaif-Vicky Kaushal Wedding: From Courtship to Marriage, Here's The Timeline Of Their Love Story Just for You

Vicky Kaushal and Katrina Kaif's relationship was always part of rumours or more like two people we ship together. We never really thought it will be a reality. So now that a wedding is happening for real, let's rewind to know how the love story began. 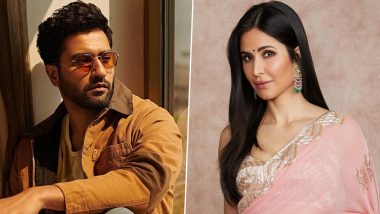 Vicky Kaushal and Katrina Kaif's wedding will soon be upon us. While the couple hasn't confirmed it yet which perhaps is the unsaid rule of the industry, the confirmation came when the District Magistrate of Sawai Madhopur spoke to the media about the wedding security arrangements. Now that things are rolling and everyone is painstakingly following it, we had a thought in mind. When did these two actually start dating? You too must have wondered. Vicky and Katrina's relationship was always part of rumours or more like two people we ship together. We never really thought it will be a reality. So now that a wedding has happening for real, let's rewind to know how the love story began. Vicky Kaushal-Katrina Kaif Wedding: Here’s What The Groom Would Be Wearing at His Marriage.

First has to be the Koffee With Karan show where Vicky mock fainted when he heard what Katrina had to say about their pairing. Karan informed him that Katrina feels they would look good together in a movie. Vicky just couldn't stop blushing. And that's 2018! Salman Khan’s Bodyguard Shera’s Team to Handle Security Arrangements at Vicky Kaushal, Katrina Kaif’s Rumoured Wedding?.

In 2019, the two of them made an appearance together for Film Companion's Typecast series which didn't have a host. They looked quite at ease with each other.

In 2019 again, Vicky proposed to Katrina on stage of an award show. As per the person who edited the show, Salman Khan was also present and his reaction too was captured. We can't confirm though!

In the March of 2020, Bollywood played Holi together before a pandemic cruelly kept everyone apart. The bash was thrown by Isha Ambani and was attended by Nick Jonas and Priyanka Chopra as well. Katrina and Vicky were part of the same crowd and it seems they were inseparable.

Post that, sightings of the two became frequent. From watching Shershaah at a special screening together to attending Diwali parties together, Vicky and Katrina kept the rumours alive of their romance. Add to that Vicky being spotted at her residence quite frequently fueled the speculations further.

A few months back, TOI broke the news that it will be a winter wedding in Rajasthan. The confirmation flew a few days back in the form of a security detail:

Well, all we have to do now is keep refreshing their Instagram pages to get a confirmation from the couple in the form of their wedding pictures.

(The above story first appeared on LatestLY on Dec 06, 2021 06:41 PM IST. For more news and updates on politics, world, sports, entertainment and lifestyle, log on to our website latestly.com).