Singer Kavita Krishnamurthy turns a year older on January 25, 2021. With more than 25000 songs under her name in sixteen different languages, she's a force to reckon with. And as she celebrates her birthday today, here are her top five songs which are pure gold. 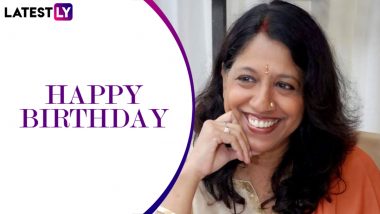 Singer Kavita Krishnamurthy turns a year older on January 25, 2021. With more than 25000 songs under her name in sixteen different languages, she's a force to reckon with. It was in the year 1976 when she churned her first-ever melody under Vilayat Khan’s composition in Kadambari. The song was ‘Aayega Aanewala', a remake of Mahal's (1949) superhit sung by Lata Mangeshkar. Later due to her hardwork and determination, she became quite a popular playback singer of the 1990s. Her tracks from Bollywood are so soothing that you’ll want to listen to them on a repeat mode. Subhash Ghai Birthday Special: Hero, Khalnayak, Pardes – 5 Iconic Films of the Ace Director and Where To Watch Them Online!

And as the singer celebrates her birthday today, we want to laud the supreme for her talent. Just google her best songs from Bollywood and we bet you’ll listen to each of them. Be it Hawa Hawai or Nimbooda, you’ll fall in love with her voice. So, here are the top 5 songs of the singer which you can’t miss out on. Watch and listen! Riya Sen Birthday Special: 5 Music Videos Of The Actress That Will Always Be Our Favourites.

While we all remember the late Sridevi whenever this song is played, the voice behind the star is none other than Kavita. Yes, she's the one who went 'Laki chiki, laki chiki, chiki laki choom,' and stunned as all with her capabilities.

This song was on every girl's playlist in the 90s. Right from the lyrics to the soothing vocals, all blended it really well with each other. Quite a fabulous song by the singer.

A fast track as compared to the two listed above, 'Dhol Bajne Laga' has a lot going on in terms of background music and instruments. Well amid this, to make one's voice stand out is not a cakewalk. But, Kavita performed it flawlessly.

This amazing melody is still among her best works, considering it makes you proud of being an Indian. The singer here does wonders and especially the higher notes give us goosebumps. The song surely relaxes your mind and soul.

Last but not the least, is Aishwarya Rai's track which was quite a hit during its time. Bu little did you know that Kavita is the one who has sung his song filled with a lot of aada. Kudos to her!

That's it, guys! These were the top five songs of the singer that are still iconic. So, which one from the above tracks, is your favourite? Tell us in the comment section. Happy birthday, Kavita Krishnamurthy from team LatestLY.  Stay tuned!

(The above story first appeared on LatestLY on Jan 25, 2021 08:10 AM IST. For more news and updates on politics, world, sports, entertainment and lifestyle, log on to our website latestly.com).