Subhash Ghai Birthday Special: Hero, Khalnayak, Pardes – 5 Iconic Films of the Ace Director and Where To Watch Them Online!

Subhash Ghai is that name from Bollywood who is known to churn hits after hits. Every kid from the 80s and 90s might know he’s a director with a vision. And as he celebrates his birthday today, here are the top five films of the ace filmmaker and where to watch them online. 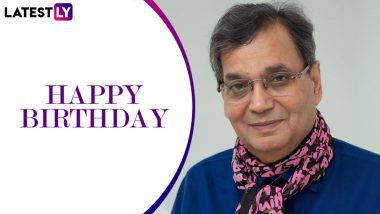 Subhash Ghai is that name from Bollywood who is known to churn hits after hits. Every kid from the 80s and 90s might know he’s a director with a vision. However, kids of the current generation will not understand the kind of art he used to bring to the big screen. Right from Jackie Shroff and Meenakshi Sheshadri’s love-hate story to Shah Rukh Khan muted feelings for Mahima Chaudhry, his movies were gem in their own ways. The best part about his creations is that as a viewer you’ll get connected to the characters and feel their emotions. Steven Soderbergh Birthday: Out of Sight, Ocean’s Eleven, Contagion – 5 Best Woks of the Filmmaker and Where To Watch Them Online!

On January 24, 2021, Subhash Ghai turns a year older and celebrates his birthday. And on this special occasion, we would love to laud the filmmaker’s best work that still are fan favourites. But instead of a long list, we bring to you top 5 movies of Ghai that you can watch anytime on ZEE5 with a subscription plan. So, without further ado, let’s get started. Subhash Ghai Shares a Still From His Song 'Pyaar Ki Ganga Bahe' on Communal Harmony, Featuring Salman Khan, Aamir Khan, Anil Kapoor And Other Actors.

A romantic film that revolved around the premise of Stockholm syndrome made Jackie Shroff and Meenakshi famous and how. During that time, the film was a super hit as it earned more than five times the budget of the flick which was Rs 3 crore. It also ran for around 750 days in many cities.

A box office blockbuster during its time, this one starred Anil Kapoor, Madhuri Dixit, Jackie Shroff, Dimple Kapadia and others. The film revolved around the story of two brothers who part ways due to different ideologies, but come together for vengeance.

With songs that were loved by the public along with a gripping storyline, Subhash Ghai gave Indian cinema Sanjay Dutt as the bad boy like never before with this one. Madhuri’s performance was also appreciated. A must-watch!

Starring Shah Rukh Khan, Mahima Chaudhry and Apurva Agnihotri as the leads, this movie earned huge at the ticket window. With NRI plot and ‘I Love My India’ message, this SG directorial was a superhit. The chemistry between SRK-Mahima was also loved by the audience.

Last but not the least, Aishwarya Rai Bachchan’s Taal can literally be termed as a musical treat by Subhash Ghai. Right from the love triangle twist, songs, location, the movie was among Ghai's best works. It was also the first Hindi movie to make it to the top 20 films on the Variety’s list.

That’s it, guys! In case, you want to go back in time or cherish old filmy memories, these are the top five masterpieces of Subhash Ghai you should not miss. Happy Birthday, to the one and only, Subhash Ghai. Stay tuned!

(The above story first appeared on LatestLY on Jan 24, 2021 09:11 AM IST. For more news and updates on politics, world, sports, entertainment and lifestyle, log on to our website latestly.com).