Kesari Movie Review: Akshay Kumar’s Tribute to Battle of Saragarhi Is a Wasted Opportunity That Works Only in Parts

Kesari barely manages to impress, mostly due to some very faulty editing and execution. 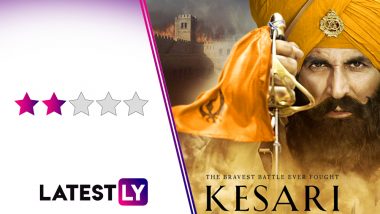 Give it to Akshay Kumar to put in a lesson or two in nationalism even in a film about a Sikh regiment fighting on behalf of the British regime. Kesari, his new movie, delves into the 1897 Battle of Saragarhi, a less explored lesson in history. Believe it or not, there were three movies in production at a time about it. Akshay Kumar and his co-producer Karan Johar beat everyone in the race to release Kesari first. But has the race to reach the theatres ensure that Kesari gives this epic moment in history the tribute it deserves? Will Akshay Kumar and Parineeti Chopra's Kesari Score Big at the Box Office? Find Out!

You should know the story by now, since the makers have been screaming from the rooftops about it. Kesari begins in 1897 with Havaldar Ishar Singh (Akshay Kumar), a sepoy leader stationed at Gulistan fort near the Indo-Afghan border. A skirmish with some Afghanis, while trying to save a woman, earns him the ire of his British superiors who transfer Ishar to the nearby fort of Saragarhi.

There, he is given the charge of the 36 Sikh Regiment, that consists of only 20 soldiers apart from him. Before we get to know them really well, the Afghanis led by a scheming maulana, attack their fort. Deciding that they are not going to retreat for the sake of their honour, the 21 Sikhs led by Ishar Singh valiantly fight against the 10,000 odd marauders, and lay their lives down with their heads high.

There is no doubt that the Battle of Saragarhi is a story that deserves to be told. Even thinking about how 21 Sikhs stood against thousands of invaders and manage to stop them from invading is enough to give you goosebumps. The presence of Akshay Kumar helps to draw in the crowds, not to mention the geniality of Karan Johar among the trade pundits. All the makers need to do was make a decent movie.

Here's where I have issues with this retelling of history. Director Anurag Singh, who had made the underrated Raqeeb before shifting to Punjabi cinema, indulges all sorts of melodrama, mush and unwanted distractions to make a very average war drama that deserves better treatment.

The first half, especially, is a downer. Right from the start when Ishar takes on a large group of Afghanis to save a girl's life, you know that there is no place for subtlety here. Kesari then moves on to some very meandering scenes involving Ishar hallucinating about his very alive wife (Parineeti Chopra), and him clashing with his new regiment over discipline and principles. There is nothing new in those sequences that you really need to spend so much time in, with some terrible character development for the supporting cast. Even the scenes between the soldiers feel like a mishmash of a couple of Akshay films, especially Gold, Singh is King and Singh is Bliing.

It is only towards the interval where Kesari manages to spruce up your interest. The second half is somewhat arresting because Kesari finally delves into what you have come for - the fateful battle. There are a few moments of combat that get your attention, particularly the fight near the door and Ishar taking on hordes on invaders all alone. And yet, Kesari doesn't manage to get you emotionally high, because of how less we spend time with the dying heroes.

Save for Ishar, that is. Kesari puts too much focus on its star lead that it is even difficult to distinguish between the rest of his comrades.

There are plenty of influences of other war movies in Kesari, notably Border (another movie that deals with real-life war story with a similar predicament), Tango Charlie and in one weird moment, even World War Z. The action choreography is pretty decent, even with some unnecessary slow-motion shots. But the VFX is unbelievably okayish, and considering that Kesari involves big production houses, this is unforgivable. I was particularly annoyed by a scene near the end, shown gloriously in the teaser of the film, that was ruined by some bad CGI in the movie. Even the shot of stabbings, blood and explosions feel as real as Akshay's distractingly fake beard and moustache. Kesari Star Akshay Kumar Wants To See a Chapter on Battle of Saragarhi in History Textbooks.

The fallings of Kesari deserve to go to the average direction and some really weak writing. The movie seems to be have made with the sensibilities of Punjabi viewers in mind, every nearly every second dialogue talking about the pride of their large pagdi. There are also a couple of dialogues that feels like WhatsApp propaganda (Ishar talks to his friend about how they have always been slaves to Mughals and British). The depiction of the villains, belonging to a particular community, as barbarians with little care for honour and moral values may not be very conducive in the current political environment. The music is okay, but the final song "Teri Mitti" is lovely.

Watch the trailer of Kesari here:

Akshay Kumar's commanding screen presence is what makes us bear through some of the film's weakest scenes. The actor is charismatic and effective, but this is not exactly a role that demands too much from him. Akshay was impressive, though, in the scene that shows Ishar's last stand against the enemies.

Parineeti Chopra's role is more of a cameo and the actress feels perfunctory in the role. The rest of the cast, especially the actors playing the 20 Sikhs in Ishar's regiment, are good.

- The Action-packed Second Half

- The Tedious First Half

Kesari works for you as a viewer if you are a fan of Akshay Kumar's brand of nationalism and don't mind a chest-thumping affair. If viewed as a historical war drama, Kesari barely manages to impress, mostly due to some very faulty editing and execution. Watch Kesari for the action-packed decent second half that teaches us a lesson in valour. But only if, you can bear through a very mediocre first half and writing!

(The above story first appeared on LatestLY on Mar 20, 2019 10:59 PM IST. For more news and updates on politics, world, sports, entertainment and lifestyle, log on to our website latestly.com).