Will Akshay Kumar and Parineeti Chopra's Kesari Score Big at the Box Office? Find Out! 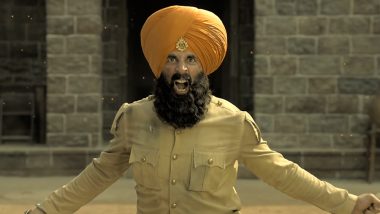 This week Akshay Kumar's highly anticipated film Kesari is finally arriving in theatres. Co-starring Parineeti Chopra, the period war drama is directed by Anurag Singh and has been co-produced by  Karan Johar, Aruna Bhatia, Hiroo Yash Johar, Apoorva Mehta, and Sunir Khetarpal. The film is based on the epic Battle of Saraghrahi which took place in 1897. 21 soldiers of Sikh Regiment from British Indian army took on around 10,000 Afghan invaders. Kumar, who has been doing a lot of films based on true events and social messages, has managed to create good buzz around his latest film. Kesari Movie: Review, Box Office Collection, Budget, Story, Trailer, Music of Akshay Kumar, Parineeti Chopra Battle of Saragarhi Film.

In fact, the trailer of Kesari which came out not too long ago was lauded on social media by one and all. Even few songs from the film have turned out be quite impressive. But more than anything else the film is obviously riding on Akshay's star power. In the past few years, the actor has had a good run at the box office with films Toilet Ek Prem Katha and Pad Man wooing the audience big time. However, Akki's last release Gold was a big disappointment despite being a sports drama based on true events. The film did cross the Rs 100 crore mark at the box office but it wasn't a big hit. And hence it's important for Kesari to do well.

Also, the fact that the period war drama is releasing on Holi, the Akshay starrer will get the advantage of an extended weekend. But will the film make full use of it? Will Kesari manage to score big at the box office on day 1? Well, according to trade experts Akshay's film should easily earn over Rs 15 crore on the first day. In fact, if Kesari does well during the morning shows then it could also end up raking in as much as Rs 25 crore on day 1. Now if that happens then Akki starrer will become the biggest opener of this year, beating Ranveer Singh's Gully Boy. Kesari Movie Review: Akshay Kumar and Parineeti Chopra Starrer Gets A Positive Response From Critics.

Interestingly. Kesari isn't a solo release. It will be clashing with Vasan Bala's action comedy Mard Ko Dard Nahi Hota. Starring newbie Abhimanyu Dassani and Radhika Madan in the lead, the film has been to various international film festivals and has already been lauded by the critics. However, its not a typical Bollywood film with familiar faces and hence it would be tough for MKDNH to find a huge audience. But the film could turn out to be a surprise package if the positive word of mouth comes into play.  According to trade pundits, Mard Ko Dard Nahi Hota won't witness a huge opening. It's expected to collect around Rs 1 crore on its first day at the ticket windows.

(The above story first appeared on LatestLY on Mar 20, 2019 07:50 PM IST. For more news and updates on politics, world, sports, entertainment and lifestyle, log on to our website latestly.com).