"In Britain, people celebrate Saragarhi Day, and here, our kids have no idea about the war," says Akshay Kumar. 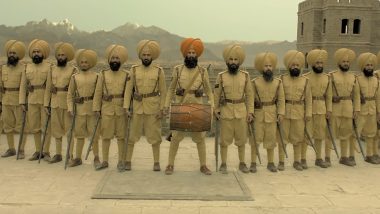 Akshay Kumar and Parineeti Chopra's period drama, Kesari, is all set to hit the screens. The trailer of the film that is based on the very brave,  21 Sikh soldiers who fought the battle of Saragarhi, has gained tremendous positive response. It was only after the trailer, that the audience went back to the pages of history to remember the bravehearts. However,  Akshay is disappointed with the fact that there is hardly any mention of this important event and sacrifice in Indian history, in the history textbooks. Kesari Stars Akshay Kumar and Parineeti Chopra Attend The Kapil Sharma Show With CRPF Jawans - View Pics!.

During a recent chat with the media, Khiladi Kumar expressed his desire to see a chapter on the battle in these textbooks. Speaking here, he said, "Google has named it amongst the five most valiant battles of all time. In Britain, people celebrate Saragarhi Day, and here, our kids have no idea about the war where 21 men took on an army of 10,000 people, knowing that they will die. They managed to kill 900 people. We are so happy to see a fictitious film like 300, but don’t celebrate our real stories of bravery enough. This story should be close to everyone’s heart. Surprisingly, our history books don’t have the slightest mention of it."

The Anurag Singh directorial is this year's most anticipated films. Akshay, who is known to nail the social dramas perfectly, has already impressed his fans through the songs and teasers.

The movie also stars Parineeti in a cruial role, as she plays the deceased wife of the actor in it. This will be for the first time that Akshay and Parineeti will be working and the buzz around their on-screen chemistry too is high. The flick will release on March 21. Do you too think that the battle should be included in the history text books? Comment below.

(The above story first appeared on LatestLY on Mar 18, 2019 03:34 PM IST. For more news and updates on politics, world, sports, entertainment and lifestyle, log on to our website latestly.com).