Sonakshi Sinha starrer Khandaani Shafakhana is all set to release on August 2 and now the makers have released a new trailer featuring her, Varun Sharma and Badshah. The trailer shows how Sonakshi's character struggles to get a hold of the small town to break away from taboos related to sex talk. Check out the new trailer inside. 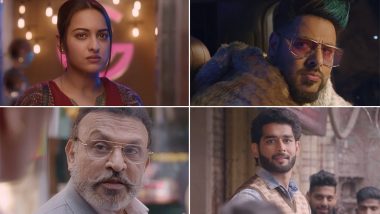 Sonakshi Sinha is all set to get people talking about their sexual problems with her latest offering, Khandaani Shafakhana. The film stars her in the role of a girl who is given the responsibility of running her uncle's sex clinic. The film combines comedy along with a social message of making a change in the notion of sex talk being a taboo. Khandaani Shafakhana also stars Varun Sharma, Badshah and Priyansh Joras in lead roles. Ahead of the film's release, the makers have now released a second trailer of the film which takes us through the journey of Sonakshi's character running in the sex clinic in a small town.  Khandaani Shafakhana: Sonakshi Sinha Starrer Gets Postponed, Shilpi Dasgupta Directorial to Release on This Date

It certainly is a challenge to be running a sex clinic in a small town, especially if you are a girl and we exactly see that in the new trailer of Khandaani Shafakahana. While Sonakshi has a difficult time dealing with her patients at the clinic, the trailer also suggests that her character is probably not even qualified to run a sex clinic. There are some amazing comic moments in the trailer brought by actors Varun Sharma and Badshah. It is amazing that despite this film being the Bollywood debut for rapper Badshah, he looks extremely comfortable.

In the new trailer, we also see the romance brewing between Sonakshi's character and Priyansh Jora's character. We earlier also got to see their budding chemistry in the slow romantic ballad, "Dil Jaaniye". The film also boasts of other peppy tracks such as the "Sheher Ki Ladki" remix which also has a special appearance by Raveena Tandon and Suniel Shetty who were a part of the original song. Khandaani Shafakhana Song Koka Out: Sonakshi Sinha and Badshah’s Track Is Surely the Next Hit Party Anthem.

Khandaani Shafakhana has been helmed by Shilpi Dasgupta. The film is all set to release on August 2 and will be clashing with Parineeti Chopra and Sidharth Malhotra starrer, Jabariya Jodi. Apart from this film, Sonakshi Sinha also has another release lined up for August 15, the multi-starrer Mission Mangal.

(The above story first appeared on LatestLY on Jul 22, 2019 01:52 PM IST. For more news and updates on politics, world, sports, entertainment and lifestyle, log on to our website latestly.com).