Khiladiyon Ka Khiladi: Rekha Was Not The First Choice For Akshay Kumar's Film But Mita Vashisht; Check Out Her Photoshoot For The Film

Madam Maya in Khiladiyon Ke Khildai is one of the most vicious and cruel female characters in Indian Cinema. Rekha did an excellent job and even picked up the Best Supporting Actress Award as well. But she wasn't the first choice for the role. It was Mita Vashisht and these are photos from the shoot. 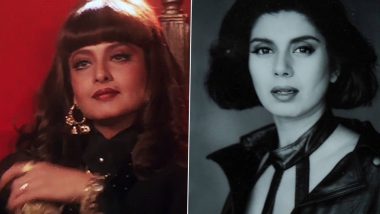 Akshay Kumar yesterday shared a hilarious meme and even corrected it. The meme counts him as one of the people in the world who took down The Undertaker. The actor clarified that it wasn't the Undertaker that he took down in Khiladiyon Ke Khiladi but a wrestler named Brian Lee. Since then, many from the 90s are celebrating the film which completed 25 years. Well, we decided to share some trivia instead. A role that won Rekha the supporting actress award was designed for Mita Vashisht. In fact, the actress even did a photoshoot for the role of Madam Maya. Sooryavanshi: Akshay Kumar and Katrina Kaif’s Film To Release in Theatres on August 15 – Reports

Mita had shared the pictures last year where she looked gorgeous. Although it was less outlandish than Rekha's garbs in the movie, it really exuded the charm and viciousness of Madam M. And guess what? The costumes were designed by Oscar winner Bhanu Athaiyya. Oh My God 2: Not Lord Krishna, Akshay Kumar to Play a Different God in the Sequel Helping Pankaj Tripathi’s Character? (LatestLY Exclusive)

Check out the pictures here...

Mita had revealed in a previous interview that she couldn't do the film for some reason but she loved the pictures of the photoshoot. Well, we loved it too.

(The above story first appeared on LatestLY on Jun 14, 2021 12:33 PM IST. For more news and updates on politics, world, sports, entertainment and lifestyle, log on to our website latestly.com).