Looop Lapeta: Taapsee Pannu–Tahir Raj Bhasin’s Netflix Film Is Hindi Remake Of Run Lola Run; All You Need To Know About 1998 German Movie And Where To Watch It Online

Looop Lapeta is the upcoming Netflix film starring Taapsee Pannu and Tahir Raj Bhasin in the lead. Helmed by Aakash Bhatia, the upcoming Hindi film is a remake of the German movie Run Lola Run. 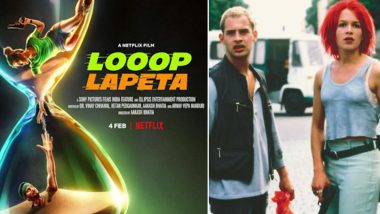 Looop Lapeta is the upcoming Netflix film starring Taapsee Pannu and Tahir Raj Bhasin in the lead. Helmed by Aakash Bhatia, his directorial debut, the upcoming Hindi film is a remake of the German movie Run Lola Run. About the director and film Bhasin had said in a statement, “Our director has a unique style stamp that has created a visually stunning world where thrill and comedy combine for one crazy rollercoaster of an entertainer.” Looop Lapeta: Did You Know Run Lola Run, The Inspiration Behind Taapsee Pannu’s Film, Was Already Remade in Bollywood?

Looop Lapeta, produced under the banners of Sony Pictures Films India and Ellipsis Entertainment along with Aayush Maheshwari, will showcase a series of events that constantly prompts Savi (Taapsee Pannu) and Satya (Tahir Raj Bhasin) to make choices that define their future. The film is set to be premiered on Netflix on February 4. Looop Lapeta Trailer: Taapsee Pannu and Tahir Raj Bhasin’s Netflix Film Is a Thriller With a Time-Loop Twist (Watch Video).

Ahead of the grand release Looop Lapeta on the streaming giant, here’s all you need to know about the original film, Run Lola Run, which released in 1998.

Cast – Run Lola Run was written and directed by Tom Tykwer. It starred Franka Potente in the titular role and Moritz Bleibtreu as Manni in the lead. The thriller also starred Herbert Knaup, Nina Petri, Armin Rohde among others in key roles.

Plot – The story is about a young couple named Lola and her beau Manni. The young girl is on a mission to rescue her boyfriend by obtaining 100,000 Deutschmarks in 20 minutes. The film shows how Lola wanders aimlessly to earn the desired Deutschmarks and save Manni’s life.

Accolades – Run Lola Run, a critically acclaimed film, had won several awards including the BAFTA Award for Best Film Not in the English Language, Best Film at the Seattle International Film Festival among others. It was also selected as the German entry for the Best Foreign Language Film at the 71st Academy Awards, however, Tom Tykwer’s directorial couldn’t bag a place in the nominations.

(The above story first appeared on LatestLY on Jan 13, 2022 01:46 PM IST. For more news and updates on politics, world, sports, entertainment and lifestyle, log on to our website latestly.com).