Love Aaj Kal is directed by Imtiaz Ali, and is a reprisal of his own movie by the same name in 2009. The movie stars Kartik Aaryan, Sara Ali Khan, Randeep Hooda and Arushi Sharma in the lead. 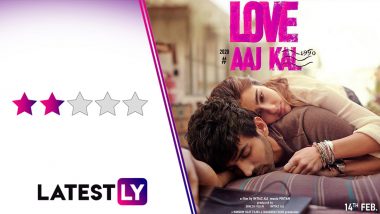 Love Aaj Kal Movie Review:  The first Love Aaj Kal that came out in 2009, pitted a flashy modern-day love story of two youngsters against a love-wins-all romance of yesteryears. Now in 2020, Imtiaz Ali, in an attempt to win back his fan-base after the disastrous Jab Harry Met Sejal, uses the same formula but with new 'twists'. If the yesteryear tale in Love Aaj Kal 2009 was blended in the goodness of the '70s, then the same track in Love Aaj Kal 2020 transcends through the gooeyness of the '80s to the meanness of the '90s. The rest is the same 'ol Imtiaz Ali palate. And not the Jab We Met Imtiaz that we actually like more! Sara Ali Khan Shares Adorable Throwback Pictures With Kartik Aaryan from the Sets Ahead of Love Aaj Kal's Release.

Zoe (Sara Ali Khan) is a career-driven youngster in Delhi looking for that one big break. One night at the pub, she hooks up with Veer (Kartik Aaryan), a socially awkward engineer (I see what you did there, Imtiaz!) for a casual fling. To her complete surprise, he refuses to sleep with her and thereafter follows here everywhere, claiming she is something special.

In normal situations, Veer would have been at the receiving end of a heavy dose of pepper spray. But since Zoe is an Imtiaz Ali heroine, she has to be fascinated by Veer's idiosyncrasies. She is pegged on by Raj (Randeep Hooda), the owner of the cafe she frequently uses, to give Veer a chance. Apparently, he sees something in their underdeveloped bonding that we don't. Raj then narrates his own love story to inspire Zoe to go for Veer.

So we have a younger Raj who was Raghu then, played this time by Kartik Aaryan (because Raj tells Zoe that Veer reminded him of his younger self), who also stalks his schoolmate Leena (debutant Arushi Sharma) in their hometown in Udaipur and makes her fall for him. And like with the original film, Raj is in no hurry to finish his tale, so hearing the romantic episodes inspires Zoe to reciprocate Veer's special love and put her career in the backseat.

One day, Zoe stumbles upon the fact that Raj's love story doesn't exactly go for a fairy tale finish. Since her romance is dependent on the outcome on someone's else story, Zoe, naturally, begins to doubt whether she has done the wrong thing by choosing career over love. Apparently in Imtiaz Ali universe, we can't have both in lives. Forget giving you Valentine feels, movies like Love Aaj Kal will make you question your reality as a regular workhorse, and leave you in depression for the entire day.

Reality-questioning apart, the first Love Aaj Kal came at a time when Imtiaz Ali was yet to be obsessed with writing socially inept protagonists. It wasn't Imtiaz's strongest film, but it was certainly one of his breeziest, and more relatable ones. Everything was clear-cut there, right from the conflict (commitment phobia) in the main love story, to the pleasantness of the older romance, that teaches the youngsters a thing or two about love. Love Aaj Kal: 5 Things That Have Changed Since Imtiaz Ali Made The Original With Saif Ali Khan and Deepika Padukone in 2009.

One of the rare things I liked about Imtiaz Ali's new version, is the different, darker direction he takes the older love story to narrate a story of wrongdoings, longing and regrets. That's the only different direction that he takes with his new version, at the end of which you ponder, what's the purpose of it all.

The clear weak link is Veer and Zoe's track. In the movie, they are supposed to be these confused millennials, especially Zoe who often gets swayed by her mother (Simone Singh) and a cafe-owner.

But in Imtiaz's version, they come across as millennials as thought by a 40-year-old man, who is smoking a hookah while reading Rumi. As a result, we have them drop random F-words while also going for philosophical ramblings. While the depiction of problems surrounding work-life balance feels relatable, the Rumi-ness of it makes everything, including the dialogues which are usually Imtiaz's forte, feel so hollow. On two occasions, two separate characters tell Zoe to stop thinking so much. I wish their creator would have listened to their advice.

To my relief, Imtiaz the director is back in sparkling form. There are occasional splashes of brilliance in how he depicts certain scenes. Like, the sequence where Raghu is lured into sin, is shown through him walking from a brightly lit room to a dark staircase. Or the silent sequence when he meets Leena after years.

But even in these scenes, Imtiaz trips over the tropes he himself created. Like, in the second aforementioned scene, Kartik's jawline is CGI'ed to make him look more like Randeep's, which makes it very distracting. If Zoe is relating Raghu's character to Veer's likeness, why the need to make them have facial similarity later on, that too such a jarring one?

Still, it is Imtiaz's hold over his befuddled narrative is what makes Love Aaj Kal a watchable experience. But the director is let down by his own writing, which seems to be making a hotchpotch of his earlier efforts from Love Aaj Kal, to Rockstar, to Tamasha.

Like Jab Harry Met Sejal, except for Raj/Raghu, the rest of the main characters comes across either flustered or under-written. We really don't know what's the deal with the eccentric behaviour of Veer, who comes across as The Big Bang Theory's Leonard and Sheldon rolled into one and then that person is crossed with Janardhan of Rockstar. Zoe's swaying motivations and shrieking behaviour come off across as more annoying than relatable. Even their chemistry itself feels half-baked, despite the actors looking so good together, which in turn, makes their love story come off as detached.

In fact, Zoe's scenes with Raghu has more warmth and depth. Also, why is it that in this era, we are still romanticising stalking as a favourable way of courting? And why are we still showing a forgiving attitude towards male infidelity?

At least the first half, despite its length, is quite engaging thanks to the interesting manner in which Imtiaz frames the parallel love stories, and also the twist that Raghu's story takes, affecting Zoe's in the present timeline.

It's in the second half, though, where the writing runs out of steam, leading to very predictable conclusions to both the tracks. There are moments of randomness in the narrative. A new girl in Veer's life disappears after a couple of scenes. Raghu's spat with his boss at the restaurant feels completely pointless to the narrative, apart from showing his newly acquired cocky attitude.

By the end of it all, you yearn for that lovely moment in the first Love Aaj Kal, where Rishi Kapoor's character goes home and we get to see his life with his wife. Sadly, nothing of that sort here.

At least, the new Love Aaj Kal is lovingly photographed by Amit Roy, be it the dusty lanes of Udaipur, the neon-flashiness of Delhi pubs, or the luscious greens and whites of the Himalayan terrains. The music is ordinary, though, with only the recreated songs from the previous films creating some impression. Or is it because I was really yearning for that movie by the end?

The three lead actors give their earnest efforts to the director's vision, even if we get mixed results in the end, Kartik Aaryan, out of his comfort zone, puts an impressive show in his dual roles. I prefer his performance in the '90s track more than 2020 one, more so because his character is better defined in the former.

Sara Ali Khan, stepping into her father's shoes in the reprisal, has a congenial personality, a smile that lights up a scene and confidence that gels with her act. But there are occasions where she goes very theatrical, which results in her hamming it up. Like, the scene where Zoe has a shouting match with her mother, where both Simone Singh and Sara go OTT with their acting. A couple of times, her theatricality even ruins some good moments, like her final scene with Randeep.

Arushi Sharma performs decently, even though her character gets a less-than-deserving scope.

And then there is Randeep Hooda, who gives the film's best performance. Even though I am confused by his character's age in the present-day portions (is he in his late '40s?), Randeep is incredible as the catalyst in the main love story. His arresting screen-presence and deep, soothing voice make you wish we had an industry that cared more for actors than star kids. The scene where he breaks down in front of Sara is brilliantly performed by the actor.

- Engaging In the First Half

Love Aaj Kal 2.0 is far from Imtiaz Ali's better efforts, as the filmmaker gets lost in his own formula that he has been concocting since Rockstar. The movie occasionally spits sparks of genius, only to end up being a disoriented, futile venture that questions the need to reprise a film that came out mere 11 years back!

(The above story first appeared on LatestLY on Feb 14, 2020 03:19 PM IST. For more news and updates on politics, world, sports, entertainment and lifestyle, log on to our website latestly.com).