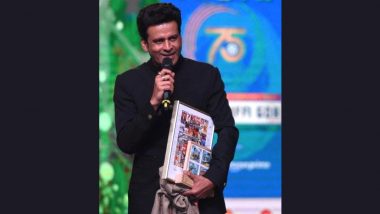 Stating that he believed that IFFI was a great vehicle to encourage India's next generation of filmmakers, actor Manoj Bajpayee on Sunday said that he believed the country, with its huge population, could be a great force in entertainment. Speaking at the closing ceremony of the 52nd edition of the International Film Festival of India. Prasoon Joshi Honoured With ‘Film Personality of the Year’ Award at the 52nd IFFI.

Manoj Bajpayee said, "I personally believe that the IFFI, organised by the government of India is a great vehicle to instigate and encourage new filmmakers and the coming generation of filmmakers. A country of such a huge population can actually be a great force in entertainment in the coming years in the world and this platform (referring to IFFI) is going to be the major force behind them." IFFI 2021: Amazon Prime Video Conducts an Informative Masterclass on Vicky Kaushal’s Sardar Udham at the Festival’s 52nd Edition in Goa.

Earlier, the actor was honoured on the occasion by Goa Chief Minister Pramod Sawant, Union Minister of Information and Broadcasting Anurag Thakur and lyricist and CBFC chairperson Prasoon Joshi.

(The above story first appeared on LatestLY on Nov 28, 2021 10:06 PM IST. For more news and updates on politics, world, sports, entertainment and lifestyle, log on to our website latestly.com).