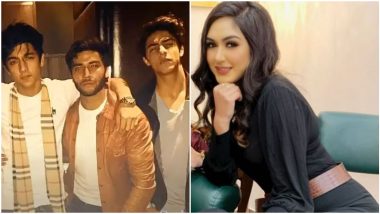 In a setback for superstar Shah Rukh Khan's son Aryan, a Mumbai court on Friday rejected his bail plea as well as of two others who were among the eight arrested following the raid on an rave party on a luxury cruise ship. Additional Chief Metropolitan Magistrate R.M. Nerlikar rejected the bail of Aryan, Arbaaz Merchant, and Munmun Dhamecha, upholding the contentions of the Narcotics Control Bureau. Mumbai Cruise Drugs Case: Esplanade Court Rejects Aryan Khan, Arbaaz Merchantt And Munmun Dhamecha’s Bail Plea.

Lawyers for the accused told the media that though the detailed reasoning for the order will come later, they plan to apply to the Sessions Court for bail on Monday. Presently, all the six male accused will remain in Arthur Road Central Jail and two female accused shall be lodged in the Byculla Women's Jail. Amid Aryan Khan’s Drugs Case, Johny Lever Extends Support to Shah Rukh Khan by Sharing a Rare Throwback Pic.

Earlier, since the past one week since their detention and subsequent arrest, they were kept in the NCB lockup in south Mumbai.

(The above story first appeared on LatestLY on Oct 08, 2021 06:25 PM IST. For more news and updates on politics, world, sports, entertainment and lifestyle, log on to our website latestly.com).