Naseeruddin Shah and Anupam Kher had acted in quite a few popular movies together, most famously in Subhash Ghai's Karma and Neeraj Pandey's A Wednesday. 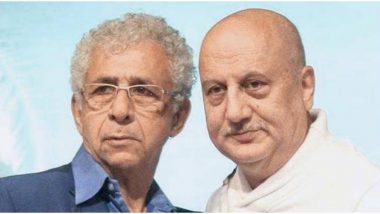 Naseeruddin Shah did an explosive interview with senior journalist Siddharth Bhatia for The Wire, where he talked about the current socio-political situation of the country. Of course, the Citizenship Amendment Act and the National Register of Citizens were the hot topics of the interview, with the National Award-winning actor lauding the students protesting against the acts. At the same time, he took potshots at Prime Minister Narendra Modi and Home Minister Amit Shah for their contempt towards these students. Naseeruddin Shah Calls Anupam Kher a ‘Clown’; Mocks PM Narendra Modi’s ‘Entire Political Science’ Degree (Watch Video).

His most controversial statement was against a Bollywood colleague of his - Anupam Kher. Kher, who is never averse to showing his BJP proclivity, was called a 'clown' and a 'sycophant' by Shah in his interview. He had said, "Any number of his contemporaries from NSD (National School of Drama), FTII (Film and Television Institute of India) can attest to his sycophantic nature. It's in his blood. He can't help it."

In which Naseer sahab minces no words. @AnupamPKher is a coward and a SYCOPHANT. pic.twitter.com/TkV1rm5CMW

Naseeruddin Shah and Anupam Kher had acted in quite a few popular movies together, most famously in Subhash Ghai's Karma and Neeraj Pandey's A Wednesday. Manoj Bajpayee Says He Never Worked With His Idol Naseeruddin Shah and Yet Did Four Films Together!

Anyway, Shah's comments on Kher didn't go down well with the supporters of the latter, as the right-wingers came out on Twitter to troll him.

Naseeruddin Shah has Completely LOST IT. Calling his very successful Colleague Anupam Kher- a well known versatile actor both in bollywood & internationally -a Clown & sycophant- only shows how frustrated Shah himself is. #NaseeruddinShah #AnupamKher pic.twitter.com/RtTKgQmohD

Reactions from Naseeruddin, Najeeb Jung, Irfan Habeeb has made it clear that for them it's always Islam first. Bus thoda scratch karne ki zarurat hai. #naseeruddinshah

#naseeruddinshah said this in Wednesday. Amit shah is just implementing it.

Naseeruddin has lost his mental balance & is a clown himself.

Every muslim has to follow three canon laws of Islam. They will go to any extent to be fair to those 3 laws. Fortunatly #naseeruddinshah being a muslim, follows those three laws, so don't ever expect something sensible out of his mouth. pic.twitter.com/AHeEGNYcwb

#naseeruddinshah is abusing @AnupamPKher because he speek for Kashmiri pandits. Now this so called liberals r complitly exposed as they shown there hatred for Hindu community

It is interesting to note here that most of the slander against Shah is on his religious identity, which is exactly what the actor has been speaking up in the interview.

At the time of writing this article, Anupam Kher has not yet responded to Shah's remarks. So watch this space for further updates on the story.

(The above story first appeared on LatestLY on Jan 22, 2020 03:07 PM IST. For more news and updates on politics, world, sports, entertainment and lifestyle, log on to our website latestly.com).