Not Daenerys Targaryen, nor Night King, but Bollywood King and Queen - Shah Rukh Khan and Gauri Khan - Have Taken over the Iron Throne, See Pic 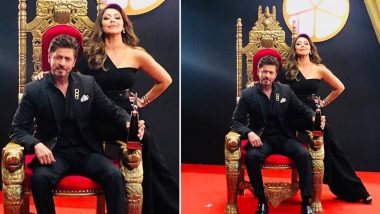 While the Night King, Daenerys Targaryen, Cersei Lannister, Jon Snow, among others, are fighting the Game Of Thrones, the iron throne has already been taken. And no, it is not someone from the characters of GOT, but our very own Bollywood King Khan and he has his Queen complementing him. Shah Rukh Khan and wife Gauri Khan have been touted as the glorious King and Queen of Bollywood for years and now the superstar is eyeing the seven kingdoms too! Hindustan Times India's Most Stylish 2019 Awards happened Friday night and during the starry night, SRK was clicked with Gauri on a throne. Watch Gauri Khan Let Out a Cute Secret About Shah Rukh Khan in This Video from HT India's Most Stylish Awards 2019.

In a post shared by Viral Bhayani, the Dilwale actor is spotted sitting on the golden throne, with Gauri accompanying her hubby. The picture was captioned as, “Game of thrones Season Finale. The endless wait - it's finally coming ❤️ #shahrukhkhan#gaurikhan.”

Well, if this has to be the final outcome of Game Of Thrones, we do not really mind watching SRK on that magnanimous throne. Ever since the picture was posted, the internet has been flooded with it and the SRK fans are rooting for it. HT India’s Most Stylish 2019 Awards Full Winners' List: Shah Rukh Khan-Gauri, Katrina Kaif, Vicky Kaushal Take Away the Coveted Trophies.

HT India’s Most Stylish 2019 Awards was solely dedicated to the fashion aspect of the industry. This year too, the ceremony saw who's who from the industry including Shah Rukh Khan, Ranveer Singh, Anushka Sharma, Akshay Kumar, Katrina Kaif, Karan Johar, Vicky Kaushal, Taapsee Pannu and many more. However, Bollywood's King and Queen, obviously, SRK and Gauri were the ones who received the accolade for being the most stylish couple.

(The above story first appeared on LatestLY on Mar 31, 2019 12:56 PM IST. For more news and updates on politics, world, sports, entertainment and lifestyle, log on to our website latestly.com).