Definitely, a lot of efforts have been put into this scary movie and we look forward to it on March 2! 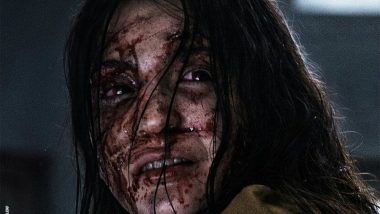 Anushka Sharma in a still from 'Pari'. (Photo Credits: Twitter@AnushkaSharma)

Anushka Sharma’s Pari is nearing the release date and the makers are hell- bent on scaring the people. The actress and her new look in this Prosit Roy directed film is the talk of the town. It is surprising how Anushka has turned into an unrecognizable figure in this movie. Her blood- shot eyes, pale skin and frightening expressions are all over the social media. While her husband and star cricketer Virat Kohli is busy posting cute posts of her, Sharma is all engaged in scaring him with her horrific appearances.

The latest post shared by Anushka is one such picture. Her face is covered with blood and face is plastered with a wicked smile. Clearly, not a good visual! However, the look of the Phillauri actress has stolen the heart of Mr Kohli. Just like the new still, her other stills are full of horror and it is a no-brainer that Virat is all excited about his wife’s not-so-pretty nature.

If you are horrified with Anushka’s character in the film ‘Rukhsana’, then the blame is on British Prosthetic Designer, Clover Wootton. The man behind the character’s face revealed the details about how she attained this look for the film.

Wootton told a leading publication, “With Rukhsana’s character, we needed to understand that she has been through a lot physically, and that is how her look had to be designed. Her hair quality is bad and damaged, her skin would be pale, dry and dirty. The conditions that she has been living in will have had an effect on her body, but at the same time she needed to look attractive too."

Definitely, a lot of efforts have been put into this scary movie and we look forward to it on March 2! Post your thoughts in the comments section below and stay tuned for more updates.

(The above story first appeared on LatestLY on Feb 22, 2018 02:30 PM IST. For more news and updates on politics, world, sports, entertainment and lifestyle, log on to our website latestly.com).