If you thought that Shah Rukh Khan is all set to make a comeback to screens this year in 2021 with Pathan, then you were wrong. As his movie is now slated to hit the theatres in 2022. It's disappointing news for SRK fans for sure. Check it out. 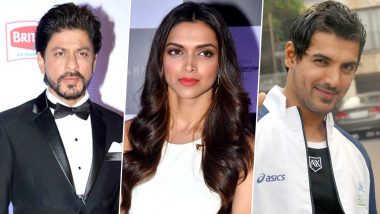 When Shah Rukh Khan was spotted at Yash Raj Studios in November last year in long hair, fans were on cloud nine that the actor has started shooting for his next Pathan. With this, they also speculated that the superstar's flick will release in theatres in 2021. However, there's a piece of sad news for all SRK, fans as trade analyst Taran Adarsh has now clarified that Pathan will make it to the silver screen next year and not this year. Yes, you read that right. From Ranveer Singh’s Jayeshbhai Jordaar to Akshay Kumar's Prithviraj, YRF Announces Release Dates of 5 Films in 2021; Shah Rukh Khan’s Pathan Is Missing!

A few days ago, when YRF had announced its slate of movie releases for this year, it included Ranveer Singh's Jayeshbhai Jordaar, Ranbir Kapoor's Shamshera, Akshay Kumar's Prithviraj, but there was no mention about Pathan. And now, finally, we know the reason, why Shah Rukh Khan's film was missing from the list. Apart from SRK, the movie also stars Deepika Padukone, John Abraham and will see Salman Khan doing a cameo. Pathan: Salman Khan Confirms His Cameo In Shah Rukh Khan’s Film On Bigg Boss 14 (Watch Video).

#BreakingNews... #Pathan - which marks #SRK’s return to the big screen after a hiatus - will release in 2022... Not 2021... #SRK collaborates with leading production house #YRF after a long gap. pic.twitter.com/UdqTsdAoBp

Earlier, when SRK had wished one and all a Happy New Year, he had stated, "See you on the big screen in 2021.” Well, if King Khan was sure to see his fans at the cinemas in 2021, we wonder, why is Pathan not releasing this year? Is it because there are no festive dates available for SRK's comeback?

Meanwhile, Shah Rukh Khan was last seen in Zero (2018) opposite Anushka Sharma and Katrina Kaif. The movie did not fare well at the box office and was a debacle. Stay tuned!

(The above story first appeared on LatestLY on Feb 21, 2021 04:29 PM IST. For more news and updates on politics, world, sports, entertainment and lifestyle, log on to our website latestly.com).