R Balki Birthday: From Cheeni Kum to Paa, 5 Movies by the Director With Unconventional Plots

Today, as the director celebrates his 56th birthday, we are going to talk about his movies. He has directed 5 movies in his career, apart from producing one and only wiring another. Let us dive right into his brilliant filmography. 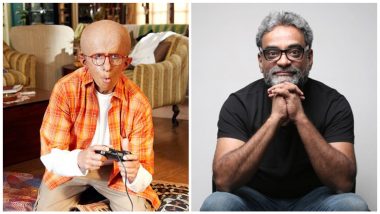 Popular Indian filmmaker R Balki turns 56 today. Subtlety is Balki's middle name. Ok, that is not true, but he is very subtle with his nuances. He can make a movie on exceptional topics such as progeria, age gap, and menstruation and present the story with utmost subtlety. The cinematography is fine and does not distract you from the story. The dialogues are relatable. The acting is never loud. R Balkis movies are a delight for introverts. Amitabh Bachchan on His Paa Director R Balki: ‘Every Time I Work with Him, He Comes Up with Weird Ideas’.

Today, as the director celebrates his 56th birthday, we are going to talk about his movies. He has directed 5 movies in his career, apart from producing one and only writing another. Let us dive right into his brilliant filmography.

Akshay Kumar starrer film about menstruation was pathbreaking. Too bad, the movie did not reach the audience as it should have. The movie is a must-watch, especially in a society where something as natural as menstruation is still a taboo.

Dhanush and Amitabh Bachchan played lead roles in this out of the box movie. The film explored the themes of fame and stardom. The plot is slightly unbelievable but the lesson behind it is large enough for your suspension of disbelief.

Once again, Balki explored a unique concept with his film. The movie featuring Arjun Kapoor and Kareena Kapoor Khan was about stay-at-home husbands, a concept that the world is yet to accept fully.

Amitabh Bachchan played the role of a 14-year-old kid with progeria disorder in this film. The actor's son Abhishek Bachchan played his father in the film. This should be enough info for you to watch it.

Balki made his film directing debut with this romantic comedy about age gap in romance. Tabu and Amitabh played the lead roles.

Balki has also produced English Vinglish, which has been directed by his wife, Gauri Shinde. Balki also wrote the story of the recent hit film, Mission Mangal. So, these were the awesome Balki-directed movies that you should definitely watch. We are in quarantine with some extra time, plus it is his birthday. So, a perfect occasion.

(The above story first appeared on LatestLY on Apr 22, 2020 12:50 PM IST. For more news and updates on politics, world, sports, entertainment and lifestyle, log on to our website latestly.com).