Veteran actor Sanjay Dutt on Friday expressed grief over the demise of the legendary choreographer of the Indian film industry and said that the news of her demise has left the actor heartbroken. 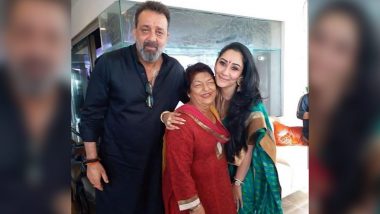 Mourning the death of legendary choreographer Saroj Khan, noted actor Sanjay Dutt said it has left him heartbroken. nThe 'Panipat' actor put out a throwback picture with the late choreographer on Twitter that shows how close she was with Sanjay and his family. nIn the picture, Sanjay and wife Manyata are seen standing with Saroj Khan as she hugs her while the trio smile and look into the camera.nAlong with the lively picture, the 'Khalnayak' actor penned a note mourning the loss of the late choreographer. He noted, "This news has left me heartbroken. Saroj ji was not just a legend but also a humble person. Saroj Khan Demise: Imtiaz Ali Reminisces Masterji’s National Award Win for Jab We Met, Reveals How Choreographing ‘Yeh Ishq Haye’ Was Co-Incidental

"Sanjay Dutt, often called non-dancer by his critics, worked with Saroj Khan in some superhits in the 90s like Saajan, Khalnayak, Thanedaar, which went on to become blockbusters and had some amazing dance numbers. nNoting the beautiful relationship that they shared, Dutt added, "We shared a beautiful relationship & worked in many films together. Her contribution to the industry is irreplaceable as there was no one who could dance like her. Om Shanti."Saroj Khan, the three-time National Award winner was credited for choreographing more than 2,000 songs. Aditi Rao Hydari Shares Heartfelt Post for National Award-winning Choreographer, Saroj Khan, Who Worked with the Actress in Her Tamil Debut Sringaram.

This news has left me heartbroken. Saroj ji was not just a legend but also a humble person. We shared a beautiful relationship & worked in many films together. Her contribution to the industry is irreplaceable as there was no one who could dance like her. Om Shanti. pic.twitter.com/bTh1PkuN4X

Her list of credits includes iconic numbers such as 'Dhak Dhak Karne Laga' from Beta (1992), 'Ek Do Teen' from Tezaab (1988), 'Hawa Hawai' from Mr India (1987) and many more. Khan, who was earlier admitted to a hospital in Mumbai last month for breathing issues, passed away on Friday. She was 71.nShe died due to a cardiac arrest in the ICU of Mumbai's Guru Nanak Hospital, where she was admitted on June 20.nThe last rites of Saroj Khan will be performed at Malvani in Malad, Mumbai today.