Rohit Shetty Gets Simmba, Singham And Sooryavanshi To Give A Shout-out To Will Smith And Martin Lawrence's Bad Boys For Life (Watch Video) 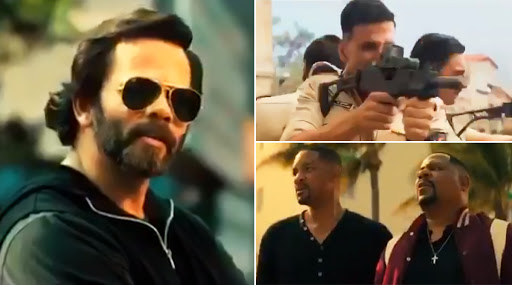 Rohit Shetty's cop universe looks really interesting with Singham and Simmba already making crores at the box office. Now it's Sooryavanshi's turn to spin the same magic this March. But before all that happens, Shetty wants you to check out some Bidesi police action in Bad Boys For Life which releases on January 31. The video has a scene from Sooryavanshi where all of Shetty's cop superheroes are firing bullets together. It makes way for Will Smith and Martin lawrence's mind-blowing action sequences from the film. Bad Boys for Life Trailer: Will Smith & Martin Lawrence Are Back Together for One Last Ride (Watch Video)

Desi Police is coming on 27th March with lots of action, till then meet the Videsi Police, Bad Boys For Life...this 31st January at a theatre near you. #BadBoyswithRohitShetty pic.twitter.com/sZM3m8ZZOf

Will Smith and Martin Lawrence are coming together for the last time in the series. The trailer promises high-octane action sequences with suave cars and incessant gun firing. If that pleases you, Bad Boys For Life could be your movie of choice next weekend. We wonder if there will be any sequences in Sooryavanshi akin to the Bad Boys series. We will have to wait for that.