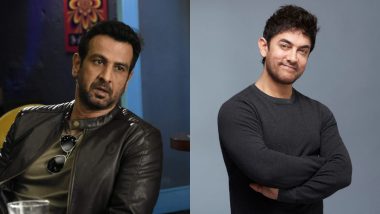 Ronit Roy has impressed us all with his good looks and acting calibre. No one else could look as suave as him playing Mr Bajaj on Kasautii Zindagii Kay. And no one else could have pulled of the role off the mean father in Udaan. His journey has not been without struggles. In a new interview with Pinkvilla, the actor has opened up revealing hat he was Aamir Khan's bodyguard for a while when he was trying to make ends meet. "I had the good fortune of being with Aamir Khan for two years. I was his bodyguard. I started my company because I had no work, so I had to do something. I was fortunate to spend time with Aamir and learnt what is diligence and drive for work," he said. [Exclusive] Ronit Roy Clarifies News About Helping People: 'Not Like I'm Selling My House's Pressure Cooker'.

Ronit added, "In many ways, Aamir started the ball rolling for me. He opened those windows for me and then I stopped caring about big cars and apartments. I then wanted to learn my craft. Very, fortunately, that was the time when Ekta Kapoor came to my life with two of the biggest shows and since then it has been a learning process and it hasn't stopped as yet." In 2002, Ronit made a breakthrough on TV with Kasautii... and Kammal.

"I wanted to be a star. I thought I wanted to be an actor but in hindsight, some 15 years back, I realised that I came to Mumbai to become a star. I wanted those big cars and wanted girls to scream my name, all that was what I wanted. Then, when I flopped, everything happens for the better. When I flopped and I didn't have work for 5-6 years, I realised this is all stardom and has nothing to do with being an actor," he added, talking more about the changes in him.

Earlier in June, the actor had talked about how despite having a successful first film, work dried up soon enough for him. "My first film was released in 1992 Jaan Tere Naam which was a blockbuster. It was a silver jubilee and silver jubilee of that day means Rs 100 crore movie of today. My debut film was of that level. 1992 it released and for the next six months, I did not receive a single call. Then I got all kinds of trashy work which I did for three years and around 96 all the work dried up," he said.

(The above story first appeared on LatestLY on Sep 20, 2020 08:06 PM IST. For more news and updates on politics, world, sports, entertainment and lifestyle, log on to our website latestly.com).