Saajan was released on August 30, 1991. Directed by Lawrence D'souza, the movie starred Salman Khan, Madhuri Dixit and Sanjay Dutt. Let us tell you a few facts about the film you may not be aware of. 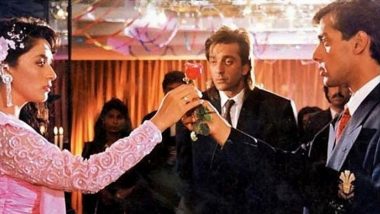 Saajan was released on August 30, 1991. Directed by Lawrence D'souza, the movie starred Salman Khan, Madhuri Dixit and Sanjay Dutt. Those were the days when two-hero projects were not seen with hesitation. In fact, a lot of actors have given superhits with two hero movies in those days. But today, it's unheard of. Saajan was quite a pathbreaker in its own way. One of the heroes has a limp while the other runs away from commitment. But there's ample love between them. The heroine has a voice here, again an unheard of occurrence in a film from the 90s. Then, of course, the music by Nadeem-Shravan! Saajan is one of the best-selling albums of that decade.  Salman Khan-Sanjay Dutt In Saajan, Shah Rukh Khan-Ashok Saraf In Yes Boss – Five Bollywood Movie Friendships That Deserve More Attention

Today, as Saajan completes 30 years, we thought of telling you a few facts about the movie that you may or may not be aware of. Eternals Theme Music Inspired by a Salman Khan-Madhuri Dixit Song? Lyricist Varun Grover Points Out This Similarity and We Just Can’t Unhear It Now!

Aamir Khan had admitted during an interview a few years back that he was approached for Saajan. But he declined as he didn't find the film to be his 'type.' He said, "Sanjay Dutt and Salman Khan ended up doing the film which turned out to be a super-duper hit. It's good I didn't do it because I might have spoiled the film had I starred in it. Saajan was perfect for Salman and Sanju." Director agreed that his first choice was Salman, Aamir and Madhuri. When Aamir declined, he approached Dutt and he came onboard.

Reema Lagoo who played Sanjay and Salman's mother in the film was only a year older than Dutt. She was seven years older than Salman too and played his mother in a lot of movies.

Saajan was the highest-grossing film of 1991 as it earned around Rs 18 crore. worldwide. Buoyed by soothing and extremely popular music and some good performances by the cast, Saajan managed to be a blockbuster.

Lawrence Dsouza went the Subhash Ghai way of featuring in his own movie. In the song, "Dekha hai pehli baar"

(The above story first appeared on LatestLY on Aug 30, 2021 04:59 PM IST. For more news and updates on politics, world, sports, entertainment and lifestyle, log on to our website latestly.com).