The actor who is currently busy with the shoot of his upcoming film Antim was accompanied by the little munchkins and Arpita on the sets. Salman's sister shared the cutest video of him spending time with cutie Ayat and his fans are not able to stop gushing about it. 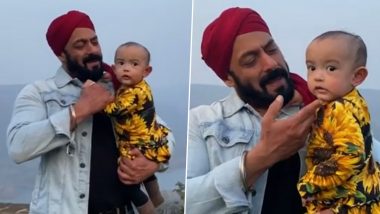 Salman Khan always has had a soft spot for kids. He has often expressed his love for children and there is no denying the fact that he loves all his nieces and nephews quite immensely. From time to time, Salman takes it to Instagram to share cute videos and photos of him spending time with Aayush Sharma and Arpita Khan's kids - Ahil and Ayat. Ahil and Salman have a lot of fun together and it is very evident that they love their mamu the most. Salman Khan on Niece Ayat Sharma's Birth: 'I Have Become Mama Again, Bas Kisike Baap Nehi Bane'.

The actor who is currently busy with the shoot of his upcoming film Antim was accompanied by the little munchkins and Arpita on the sets. Salman's sister shared the cutest video of him spending time with cutie Ayat and his fans are not able to stop gushing about it. In the video, a turban-clad Salman is seen holding Ayat in his arms. He is grooving with her and trying to grab her attention. While he is trying so hard to grasp Ayat's attention, she is not paying any heed to him and is just busy looking at the camera.

Talking about Antim, produced by Salman Khan Films, the film is said to hit the silver screens in 2021. The film also stars Mahima Makwana, after replacing Avika Gor, opposite Aayush Sharma in a key role. The film is the official remake of the Marathi film Mulshi Pattern and is being directed by Mahesh Manjrekar. Salman will essay the role of a cop while Aayush will essay the role of the antagonist. Salman Khan's Latest Pictures With Baby Ayat are Too Cute To Miss!

Apart from this, Salman Khan recently revealed that his action-thriller film, Radhe: Your Most Wanted Bhai will be released on the big screens on Eid this year. "Sorry, it has taken me a long time to revert to all the theatre owners... It's a big decision to make during these times. I understand the financial problems that the theatre owners/exhibitors are going through and I would like to help them by releasing Radhe in theatres. In return I would expect them to take the utmost amount of care and precautions for the audience who would come to the theatre to watch Radhe," Khan wrote in a tweet.

(The above story first appeared on LatestLY on Jan 23, 2021 04:25 PM IST. For more news and updates on politics, world, sports, entertainment and lifestyle, log on to our website latestly.com).