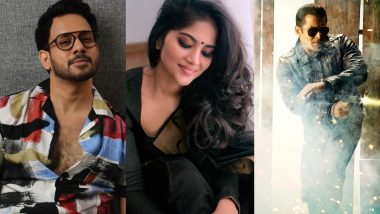 Salman Khan wants his upcoming action film, Radhe, to have a pan-India approach. The actor has previously worked with South Indian actor Kiccha Sudeep in Dabangg 3, where the latter played the role of a villain. Now, in Radhe, which is directed by Prabhu Deva, Salman will have the company of South Indian stars like Bharath, Megha Akash, Narra Srinu, as per a report by mid-day. Bharath is a popular Tamil actor who has worked in movies like Pattiyal (2006), Em Magan (2006), Pazhani (2008),  Vaanam (2011). He plays an undercover cop in Radhe. Radhe: Randeep Hooda Resumes Work, Begins Dubbing For Salman Khan's Next (View Post).

On the other hand, Megha made her Bollywood debut with Satellite Shankar in 2019. She has starred in movies like Petta with Rajinikanth. In Radhe, she'll be playing the role of Salman's colleague and will also appear in several action sequences with the actor. Lastly, Radhe will also feature the popular actor Narra Srinu for comic relief in the film. Will Salman Khan’s Radhe Clash With Akshay Kumar’s Bachchan Pandey on Republic Day or Will the Actor Play Safe With an Eid 2021 Release?

Radhe will also be the Bollywood debut for another popular face - Arjun Kanungo. The singer has been charming the audience with his voice for the longest time. Apart from original songs, his covers of hit Bollywood songs are loved by the audience. He was offered an out of the box role by Salman in Radhe.

Recently, Randeep Hooda resumed the dubbing for Radhe. He was grateful to be back at work.

Prabhu Deva has said that only three or four days of shooting for the film is pending. The movie can release anytime once the theatres open. The makers are fine with a Diwali 2020, Christmas 2020 or a Republic Day 2021 release. More on this, soon.

(The above story first appeared on LatestLY on Sep 22, 2020 10:29 AM IST. For more news and updates on politics, world, sports, entertainment and lifestyle, log on to our website latestly.com).