Will Salman Khan’s Radhe Clash With Akshay Kumar’s Bachchan Pandey on Republic Day or Will the Actor Play Safe With an Eid 2021 Release?

Actor Salman Khan will resume work with full force after being out of commission for almost seven months now. And the actor wants to prioritise Radhe as he wants either a Republic Day weekend or Eid 2021 for the movie's release. 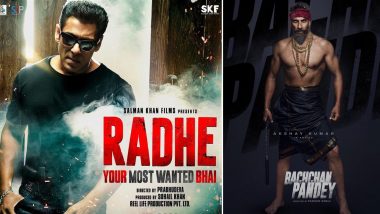 Actor Salman Khan will resume work with full force after being out of commission for almost seven months now. Given the ban on shootings because of the COVID-19 lockdown, it will be all work and no play for Salman, who is rumoured to be shooting and gearing up 4 of his films for release in 2021. If all goes as per Salman's plan, he will first shoot for Radhe, followed by Guns of North, Kabhi Eid Kabhi Diwali and Tiger 3. But Radhe seems to be Salman's priority as he wants either a Republic Day weekend or Eid 2021 for the movie's release. From Radhe to Tiger 3, Salman Khan To Have 4 Back-to-Back Films Releasing in 2021?.

And now, reports suggest that out of the four films, Salman's first priority is finishing off Radhe: Your Most Wanted Bhai, with portions and a song left to shoot, as soon as work resumes, Salman will jump straight into filming Radhe. Radhe has faced a huge delay, considering the movie was supposed to hit screens on Eid 2020 but those plans were shelved. Salman Khan's Radhe: Your Most Wanted Bhai to Skip Diwali Release and Instead Hit the Theatres in 2021?.

And now reports state that Radhe will see the insides of theatres during the Republic Day Weekend if the team manages to finish off the movie by November. If not, Bhai will be back on Eid 2021 with Radhe as a treat for his fans.

"Around 10 days of shoot still remains. Now, they are contemplating letting go of a song which is not integral to the narrative. Salman is still at his farm and looking to resume work on Radhe in October or November. It’s a big screen entertainer, so the makers are in no hurry to release the film. If they can get back to action in the next two-three months, they will target the Republic Day weekend. If they miss that, their next consideration will be Eid 2021," Mumbai Mirror quoted a source as saying. Salman Khan’s Eid Mubarak Wish for Fans in the Times of COVID-19 Is Unmissable.

The source concluded, "Salman has a tentative calendar in mind, but he won’t risk his health or that of his cast and crew for any work commitment. He is waiting for the case count to reduce and the vaccine to arrive before taking any decision. But after a much-needed break of more than seven months, there will be four back-to-back Salman starrers. Meanwhile, he has locked two-three more scripts for his production house, which he will announce once the cast is locked."

(The above story first appeared on LatestLY on Aug 05, 2020 12:51 PM IST. For more news and updates on politics, world, sports, entertainment and lifestyle, log on to our website latestly.com).