Shabana Azmi Birthday: 5 Moving Dialogues of the Actress That Are No Less Than Life Lessons 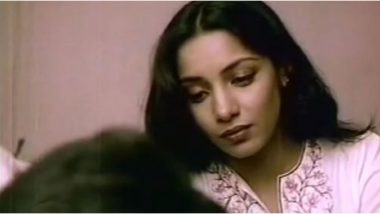 Shabana Azmi turns 70 today. The actress has starred in numerous critically acclaimed films alongside masala entertainers for which Bollywood is known for. She was also in a desi Charlie's Angels rip-off. The actress can move you to tears and make you laugh until your stomach hurts. There is something about her dialogue delivery, quite unexplainable, that she can be reading nursery rhymes and you won't be able to look away. Maybe it is the fact, she is gorgeous and yet her acting is not superficial. Shabana Azmi on Jaya Bachchan’s Parliament Speech: It Was a Much-Needed Statement, Kudos to Her!

In Doosri Dulhan, Shabana plays a prostitute who is hired to be a surrogate mother. She gives up her baby so that he can be brought up in a rich family with a good name and respect. As she hands over her own baby, she says, "Didi tumhara munna bohut sundar hai, ise kahin meri nazar na lag jaye." The weight of the dialogue is delivered with the tears in Shabana's eyes and her acting. There are many such dialogues in Shabana'sa filmography, which might sound simple, but with her acting skills, she makes the words pierce the audience's hearts. We are only going to look at a handful of such dialogues on her birthday. Shabana Azmi Joins Campaign Against Domestic and Sexual Violence During COVID-19 Pandemic.

"I desire Sita, I desire her compassion, her warmth. I desire to live again." ~ Fire

Shabana will be next seen in Sheer Qorma, a movie about an LGBT+ romance. We cannot wait to see her magic on the screen again.

(The above story first appeared on LatestLY on Sep 18, 2020 10:20 AM IST. For more news and updates on politics, world, sports, entertainment and lifestyle, log on to our website latestly.com).