Pathan reportedly made Shah Rukh Khan the highest-paid actor of India. As per reports, the actor has been paid Rs 100 crore as remuneration. The film also stars John Abraham and Deepika Padukone. It also has a cameo by Salman Khan. 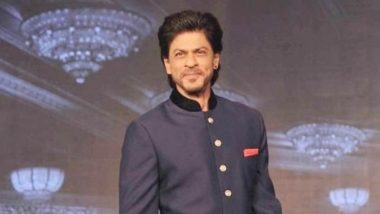 Shah Rukh Khan's Pathan has infused a new zeal in his fans who have been waiting indefinitely to know about the actor's next release. Although he never confirmed it, his action stills from the sets of the movie in Dubai made it evident he is shooting the film. Now we hear the movie has also made him the highest-paid actor in the country. As per a Twitter handle, the actor has charged Rs 100 crore for the film which also stars Deepika Padukone and John Abraham. Pathan: From Salman Khan’s Cameo to Its Release Date, How Shah Rukh Khan’s Spy Thriller Is Making Headlines Without ‘Officially’ Existing! (LatestLY Exclusive)

Umar Sandhu wrote on Twitter that Shah Rukh has charged that amount for Pathan, putting him at the top of the pile. For someone who didn't have a single release sin Zero (2018), this piece of information is quite startling. If it's true, clearly Shah Rukh's fandom is still as strong as ever.

Pathan is directed by the War fame Siddharth Anand. It also marks the return of John Abraham to Yash Raj Films after New York. In fact, it also marks Deepika Padukone's return to the production house post Lafangey Parindey.

(The above story first appeared on LatestLY on Mar 25, 2021 10:10 AM IST. For more news and updates on politics, world, sports, entertainment and lifestyle, log on to our website latestly.com).