In the video posted by Shahid, Raj Nidimoru can be seen panning the camera towards Shahid and Raashi first who are sitting next to him. He says, "Yeh mere stars hai" and then shifts the camera to Krishna DK and his team. 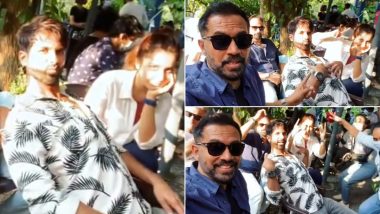 Shahid Kapoor is all so candid on social media and his fans love to see his goofy side on the internet. From making funny faces on videos to sharing hilarious pictures, Shahid's Instagram posts are quite amusing and they often go viral online. The actor is currently shooting for Raj and DK's web series along with Raashi Khanna in Goa and is often seen sharing updates about what is happening on the sets of the show. Catching up with the trend, Shahid and team even made an entertaining video on the viral 'Pawri Hori Hai' meme. Shahid Kapoor To Start Shooting For Raj & DK’s Web Series In January 2021?

In the video posted by Shahid, Raj Nidimoru can be seen panning the camera towards Shahid and Raashi first who are sitting next to him. He says, "Yeh mere stars hai" and then shifts the camera to Krishna DK and his team. He then says, "Yeh hum hai, yaha pawri ho rahi hai," before everyone breaks into a dancing mood. While others soon grooving, Shahid goes on to do a crazy dance while singing Honey Singh’s song “Party all night”.

Back in January, Shahid had posted a story with The Family Man helmers and confirmed the collaboration. He has posted a message saying, It's taking off... These bad boys got a hard vibe and a dark plan... @rajanddk." The filmmaker duo also shared the selfie on their Instagram story with a caption that read, "Badder Boy". Shahid even shared a picture with his leading lady Raashi Khanna and welcomed on board. Vijay Sethupathi To Make His Digital Debut With Shahid Kapoor For Raj & DK’s Web Series?

Apart from this, Shahid will next be seen in Jersey, a remake of the Telugu film of the same name. The 39-year-old star will be seen essaying the role of a cricket player in the movie. He had recently wrapped up shooting for it. It also features actors Mrunal Thakur and Pankaj Kapur, among others. The film will release on November 5. He also has Shashank Khaitaan's Yoddha in his kitty.

(The above story first appeared on LatestLY on Feb 18, 2021 02:08 PM IST. For more news and updates on politics, world, sports, entertainment and lifestyle, log on to our website latestly.com).