In February this year it was announced that Vidya Balan has bagged another intriguing project and it is a film helmed by Amit Masurkar. Titled Sherni, the stunning actress of Bollywood would reportedly be essaying the role of a forest officer. 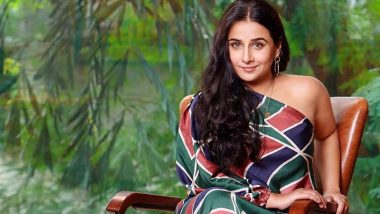 In February this year it was announced that Vidya Balan has bagged another intriguing project and it is a film helmed by Newton director Amit Masurkar. Titled Sherni, the stunning actress of Bollywood would reportedly be essaying the role of a forest officer. When the makers had announced about the film, they had also stated that the shoot would begin soon. But it couldn’t happen as planned owing to the coronavirus outbreak. Now the actress and the crew is all set for a 35-day schedule in Madhya Pradesh’s Balaghat Forest, reports Mid-Day. Sherni: Vidya Balan Signs her Next with Newton Director Amit Masurkar.

According to the report by the leading tabloid, the team of Sherni would resume shooting by October end. A source has revealed to it that the team would be taking all the necessary precautions amid coronavirus and would follow safety measures on the set. The source was quoted as saying, “A team of five to six members, who will serve as COVID-19 watchdogs, will be present on set every day to ensure that the crew is following all safety norms. Besides the government’s guidelines, the health experts will lay down additional COVID risk-management protocol. These experts are part of a professional agency that has monitored several ad shoots over the past few months. Even as they aim to achieve a zero-incident shoot, the makers have created isolation centres for asymptomatic people, on the recommendation of the experts.”

The source has also shared that the cast and crew will be put at five-star hotels and that would just an hour away from the Balaghat forest. Sherni is produced by Bhushan Kumar, Vikram Malhotra, Krishan Kumar and Amit Masurkar. The script of the film is penned by Aastha Tiku.

(The above story first appeared on LatestLY on Oct 07, 2020 10:35 AM IST. For more news and updates on politics, world, sports, entertainment and lifestyle, log on to our website latestly.com).