Being the daughter of two very talented actors, Sachin and Supriya Pilgaonkar, Shriya has proved her medal with projects like the french film Un plus une, The Gone Game, Crackdown, House Arrest and more. 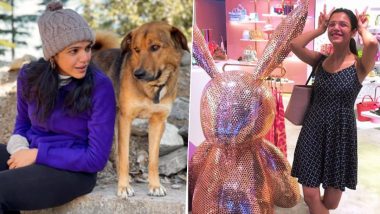 A graduate degree in Sociology, a trained Kathak dancer and a professional swimming champion, Shriya Pilgaonkar is quite a talented actor! She debuted in 2016 with Shah Rukh Khan starrer Fan and gained popularity with the web series Mirzapur that catapulted this Marathi Mulgi to fame. She has also tried her hands at direction and created some beautiful work. Shriya is also a producer and a stage performer. Shriya Pilgaonkar’s Easy Breezy Ethnic Look Is Just for Rs. 9,400!

Being the daughter of two very talented actors, Sachin and Supriya Pilgaonkar, Shriya has proved her medal with projects like the french film Un plus une, The Gone Game, Crackdown, House Arrest and more. But while we often see her playing serious characters on the screen, her real-life personality is quite the opposite of it. She is quite goofy by nature, and we often get to see the excerpts of it via her social media. The Gone Game: Shriya Pilgaonkar, Arjun Mathur, Shweta Tripathi to Star in a Thriller Series Shot in Lockdown.

Today, as the actress turns 32, we decided to dig down her social media and find 5 of the goofiest pictures of the actress. Check it out:

The One With The Bunny

Shriya can be seen cutely posing like the bunny she is standing next to. She looks absolutely adorable in this picture. She shared the post on the occasion of Easter.

Some Important Conversations With A Dog

Shriya loves animals and this picture of her conversing with a dog is super adorable. Her goofy caption, however, won our heart.

This is by far the most hilarious picture ever posted by the actress. One can see her lying down like a dog and asking for a belly rub.

Goofy Sweety On The Sets Of Mirzapur

This picture is from the sets of Mirzapur. Posing with her tongue out, Shriya looks absolutely cute in this picture.

Shriya Pilgaonkar is now gearing up for the release of her film Haathi Mere Saathi, which got delayed due to the pandemic. While we wait to see her on the screen again, join us in wishing the actress a very happy birthday.

(The above story first appeared on LatestLY on Apr 25, 2021 12:27 PM IST. For more news and updates on politics, world, sports, entertainment and lifestyle, log on to our website latestly.com).