Sohail Khan Sends an Encouraging Message to Rakhi Sawant, Says ‘Just Be the Strong Daughter Like You Are’ (Watch Video)

Earlier, Rakhi shared a video thanking Salman Khan and Sohail Khan. In the video, we see her mother in the hospital thanking the superstar and his brother for looking after her medical expenses. 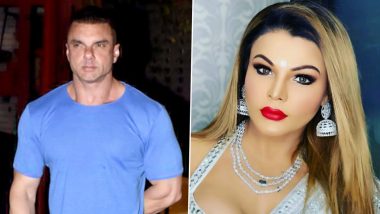 Rakhi Sawant created a wave inside the Bigg Boss 14 house and while she did not win the trophy, she garnered a lot of love from the audience. But while she was playing strongly inside the house, her mother Jaya Sawant was battling with cancer outside. In one of the episode, we even saw Rakhi cry for her mother when she learned about her ailment. She opened up about her financial situation and was seen telling other housemates how she entered BB house only so that she could make some money. Bigg Boss 14’s Rakhi Sawant’s Mother to Undergo Chemotherapy for Abdominal Cancer, Brother Reveals That It Cannot Be Operated.

Hearing this, Salman made sure he helps the actress in any possible way. Joining the bandwagon now is his brother Sohail Khan. The actor shared a sweet message saying that he is just a call away and is always there to help Rakhi. In his message, he is seen saying that he has never met Rakhi's mother but he knows how strong Rakhi is. He added that 'if you are a strong person and I wonder, how much strong your mother must be.' Sohail wished for Rakhi's mother's speedy recovery and said 'just be the daughter like you are and everything will fall in place.' He ended the video by saying that if she needs anything, he can call him directly.

Earlier, Rakhi shared a video thanking Salman Khan and Sohail Khan. In the video, we see her mother in the hospital thanking the superstar and his brother for looking after her medical expenses. She also adds that ahead of her operation, she has done four Chemotherapy sessions out of six and now will be able to continue her treatment. Rakhi's mother is said to be suffering from a tumour in her gallbladder. Rakhi Sawant’s Mother Thanks Salman Khan and Sohail Khan for Extending Financial Support In Her Cancer Treatment.

Blessing the Khan brothers, Jaya says in Hindi, "Salman, Sohail thank you. As you can see my chemotherapy is going on. I am in the hospital now. There are two more sessions to happen after which I will be operated upon. May you stay hale and hearty. May God help you prosper more. God is with you. May all your desires come true." Rakhi had walked away from Bigg Boss 14 with the prize money of ₹14 lakh. She has been busy taking care of her mother ever since and we hope she gets well soon.

(The above story first appeared on LatestLY on Feb 27, 2021 10:00 PM IST. For more news and updates on politics, world, sports, entertainment and lifestyle, log on to our website latestly.com).