Anu Malik had apparently recorded a song in YRF's own studio two days back. 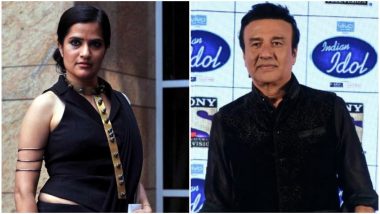 Sona Mohapatra believes in speaking her and she has no qualms in raising it against any influencer. From Salman Khan to Sonakshi Sinha, the singer has waged a war of words against many popular celebrities and Anu Malik is no different. After the #MeToo wave in India, she had recently the organisers of Indian Idol for retaining him as the judge of its new season. He was accused of sexual misconduct and the show makers had even announced his exit from the last season. Salman Khan's Fan Who Threatened Sona Mohapatra Apologises, Says He Regrets It.

However, after Indian Idol's sad news, she was delighted to read the reports about Yash Raj Films' decision to ban Anu Malik from entering its premises. The move was a thoughtful suggestion to support the allegations hurled at him. A report in Bollywood Hungama read how the composer is not allowed to enter YRF's premises and the step was taken as a measure of YRF's zero-tolerance policy against the sexual offenders. The news was clearly too good to be true as popular trade analyst Komal Nahta was quick to prove it wrong.

He took to his Twitter account to reveal that Anu Malik recorded a song for Venus two days back at YRF's own studio. If the composer was allowed to enter their building two days back, the claim about banning him from their premises was naturally untrue. The Ambarsariya singer was upset to realise the harsh reality and she slammed the production house's PR team for such false claims. #MeToo in Bollywood: Kailash Kher Tags Sona Mohapatra's Accusations as 'Not Authentic'.

Wow. So much for the zero tolerance policy of YRF for sexual offenders that @Hungama_com & @TOIIndiaNews reported earlier. Thank you for busting that PR myth, Komal. I guess the sliver of a silver lining that we seek or justice in these times is not coming our way soon. 🙏🏾🔴 https://t.co/T5xIsed3TC

After Vikas Bahl was given a clean chit in his sexual misconduct case, there are chances that Anu Malik may be next to follow his suit.

(The above story first appeared on LatestLY on Jun 01, 2019 09:48 PM IST. For more news and updates on politics, world, sports, entertainment and lifestyle, log on to our website latestly.com).