Rumi Jaffery, the director who was supposed to make a romantic comedy with Sushant Singh Rajput and Rhea Chakraborty, revealed his plans for the movie. He will either make the film with another hero or start a completely new project with the actress. 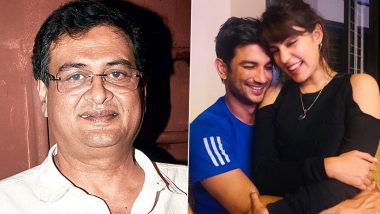 Sushant Singh Rajput and Rhea Chakraborty were supposed to do a film together before the actor decided to end his life. The aftermath of his demise was cruel to Rhea who was vilified. They were supposed to do a Rumi Jaffery film together.  A Bollywood Hungama story reveals that the director has decided the movie will either be made with a new hero or he will start a completely new movie with Rhea. Amitabh Bachchan Is Super Excited for His Upcoming Films Chehre, Jhund and Brahmastra (View Post)

Speaking to Bollywood Hungama, Jaffery said, "I have throughout maintained she’s an innocent victim. She and her family didn’t deserve this. Her father has served the country for years. I worked with her before all this (the tragic aftermath of Sushant’s death) in Chehre. I was going to shoot a love story in London with Sushant and Rhea for producer Vashu Bhagnani after the lockdown. But God had other plans." He further confirmed, "But I will work with her for sure. She deserves another chance. She is talented and beautiful and she’s gone through a lot."

Chehre will be Rhea's first movie release post the harrowing 2020 where she had to not only go through ED trials and CBI investigation but social media trials as well. The movie also stars Amitabh Bachchan and Emraan Hashmi and is directed by Rumi Jaffery.

(The above story first appeared on LatestLY on Mar 03, 2021 12:09 PM IST. For more news and updates on politics, world, sports, entertainment and lifestyle, log on to our website latestly.com).