The Sky Is Pink: 7 Beautiful Moments From Priyanka Chopra-Farhan Akhtar's Film That Leave Your Heart Heavy With Emotions (SPOILERS) 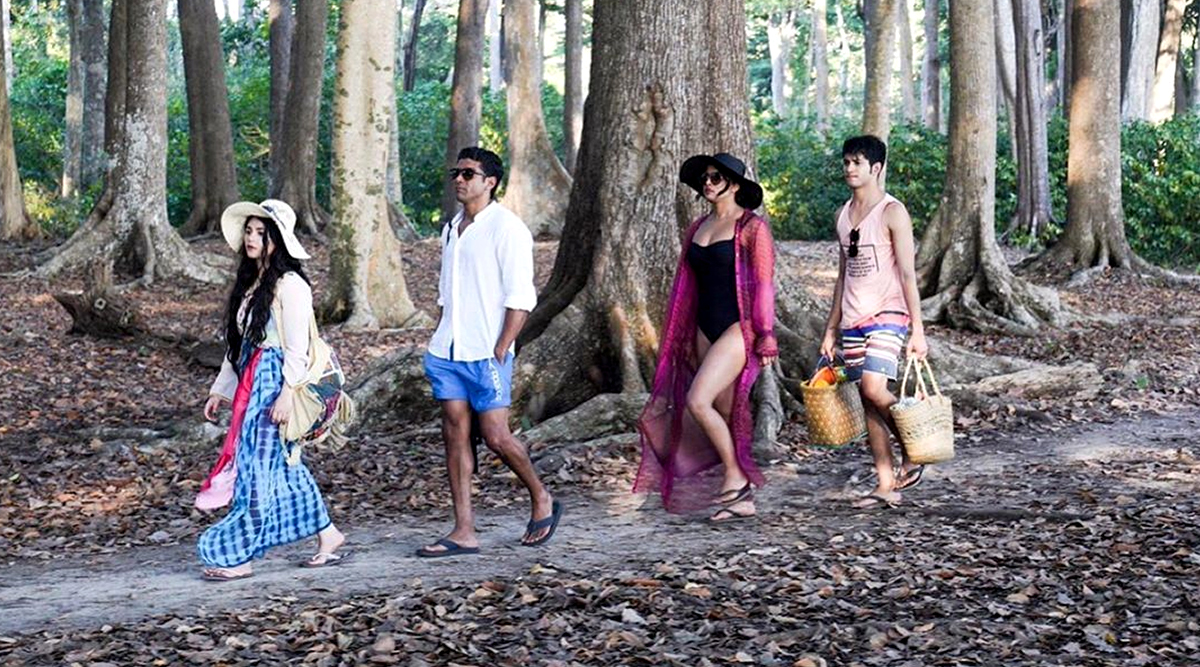 A still from The Sky is Pink (Photo Credits: RSVP Movies)

Shonali Bose is back with another inspiring story in the form of The Sky Is Pink. The film starring Priyanka Chopra, Farhan Akhtar, Zaira Wasim and Rohit Saraf in the lead, already is basking in the critical acclaim. The movie released and the reaction to it on the social media is overwhelming and positive. The real life story is based on teenage girl Aisha Chaudhary who passed way due to pulmonary fibrosis. The film is however, more of a story about her parents Aditi and Niren Chaudhary and her bond with brother Ishan and how they took upon this challenge thrown at them by life. The Sky Is Pink Review From TIFF 2019: Priyanka Chopra Jonas And Farhan Akhtar's Film Is Bound To Hit You Hard.

The film is an amalgamation of funny, intense and emotional moments. If you have not yet watched the film, read this later. If you have, take a look at these seven wonderful moments that made the film the magic that it is! SPOILERS AHEAD.

In one of the early scenes, it is shown that Niren (Farhan) and Aditi (Priyanka) request an RJ at Sunrise Radio to vouch for the donations for baby Aisha's bone marrow operation. Niren requests fans to contribute in whatever way possible. In a scene later, a phone call from Sunrise radio changes Niren-Aditi's lives. The radio station helps to collect double the amount of the money required. Aditi and Niren are seen having a light flirty moment before the call. The sudden positive phone call, changed expressions and their eyes-welled up brings a lump in audience's throat. That moment, we knew this had to be PeeCee's best comeback choice!

This scene is dedicated to the title of the film. Aditi is seen having a phone conversation with young Ishan (her second child, first one was Tanya) who is in Delhi. He complaints to his mom who is London, saying that his teacher punished him for painting the sky 'pink' instead of 'blue!' It is then when a pained, agitated Aditi gives him the best advice ever saying, 'It is not your fault. You can paint your sky in whichever colour you want to.' The subtly shot scene between Aditi and Ishan leave a lasting impact on you despite the film being on Aisha.

There is this beautiful scene when the entire Chaudhary family celebrates Christmas together along with friends and family. The scene is all happy and fun when everyone sings Christmas carols. The song changes from an upbeat one to a silent one. In this scene, Aditi cannot control her emotions and breaks down. Her eyes meet Niren who is obviously going through the same emotions. Understanding her grief, he quickly changes the carol and sings a happy one that puts a smile on Aditi's face. The scene is extremely well-put and shows that Aditi and Niren communicated without even having to speak!

Here's The Still From the Same Scene

This one is certainly one of the most intense moments in the film. The scene almost leaves you confused as to what just happened here. Aditi is seen having a severe psychotic break down on one night. She blabbers, screams and tries to strangle Farhan in the bed leaving everyone shocked as to what has gotten into her. It is then shown that she takes a treatment in a rehab for a week because of this emotional state of mind. The entire scene is sudden and extremely well-performed by Priyanka.

There is a scene in the trailer too, where Aisha (Zaira) is shown saying she does not want to 'die.' Even though the entire movie is mostly based on Aditi-Niren's romantic relationship and parenthood, the sister-brother bonding is underrated. It is shown wonderfully how Ishan (Rohit) who is in a hurry to catch a tube train, spends time talking to his sister with tubes passing by behind him. The conversation is one of the most emotional ones when Aisha says she does not want to die and he says that the family is going to join her soon! The otherwise 'hunky' Rohit shows his emotionally frustrated act perfectly.

A Still From the Phone-Call Scene

In one of the last scenes, Niren and Aditi find a hidden video message already recorded by Aisha for them. It is the last speech by Aisha. The fact that they get to hear her voice and see her months after death, itself overwhelms them and the audience. The entire video captures the gist of the film.

This had to be special! Aditi and Niren's wonderful lovestory gets a happy pit-stop here. In the second last scene, we see how Aditi finally gives in and moves in with Niren in London after Aisha's death. He takes her to the new apartment where he shows her a picture of their kids. And then, in the last scene, the makers show the real-life video clips and pictures of the Chaudhary family. It is simply heartwarming!

Well, the entire movie is a series of such beautiful moments and cannot be described in one single article. However, these are some of the milestone moments that are undoubtedly the best ones. The Sky Is Pink is sure to remain fans' one of the most favourite Bollywood films!