Torbaaz is a sports drama that is directed by Girish Malik, and is released on Netflix after being delayed for two years. Sanjay Dutt plays the lead role, while Nargis Fakhri is seen in a supporting role. Rahul Dev plays the main antagonist. 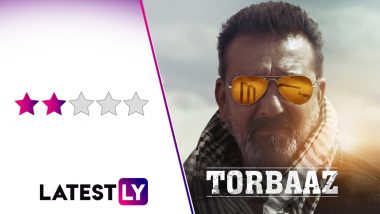 Torbaaz Movie Review: There is something affecting about Sanjay Dutt's delayed film, Torbaaz, that comes straight to Netflix thanks to the pandemic. A sports drama, Torbaaz is set against the turbulent political situation of Afghanistan, a country that is still at the mercy of Taliban extremist forces, where deaths in terrorist attacks are seen as daily occurrences by the locals. Torbaaz, directed by former actor Girish Malik, brings the focus on kids being suicide bombers, and it is also a sports drama.Torbaaz Trailer: Sanjay Dutt Is Back, Will Play A Determined Cricket Coach In This Netflix Action Drama.

While Afghanistan has its own cricket team now with world-class players like Rashid Khan, Torbaaz isn't about the rise of cricket in the country. Which, in hindsight, could have made for a more compelling story than what we have here. Instead, we have Captain Naseer (Sanjay Dutt), a former Indian army officer, coach a bunch of kids from a refugee camp to be better cricket players.

And when I say 'coach', it means we get to only see Dutt offer some motivational talk to kids, while otherwise looking as if he would rather be a spectator and let the scene-stealing child actors control the scenery. When he comes to bowl, there are at least five editing cuts just to show a single bowling action. Those kids deserve a better 'coach'.

Captain Naseer has seen tragedy up and close, when his wife, who was a social activist in Afghanistan, and their young son get killed in a suicide bombing, triggered by a kid. In the children from the refugee camp, he sees an opportunity to take them away from being potential bombers to be good cricketers. However, there is a Talibani chief Qazar (Rahul Dev) who wants a couple of those children in his outfit.

Have to say, there was a promising potential in Torbaaz's premise that merges an underdog tale with the tragic circumstances in the country. A couple of scenes do move you, like when some children relive the tragedies that happen to the. Every child actor in the film are well-cast, especially the kids who play unfortunate Baaz and the impish Sadiq.

Torbaaz also makes good use of Afghanistan (and Bishkek)'s beautiful locals, with some fantastic visuals captured by  Hiroo Keswani. Dutt, when not being a lazy coach, does better in the more emotional scenes. At least, Torbaaz feels miles better than his last outing, the terrible Sadak 2.

That said, Torbaaz fails to make good use of its interesting premise and the fantastic kid actors. The pacing in the first hour is particularly slow, and still, it feels like certain character developments are rushed. Like, it isn't very clear why Naseer would choose to stay in Kabul and teach the kids cricket, when he wanted to rush out of the country. His motivations to do so should have been handled in a better way.

Similarly, the scenes where the kids clashed with each other over their tribes and loyalties are mildly intriguing (again because of the actors, mostly). But it becomes repetitive and then the differences are hastily swept under the rug for the plot to come to their next complication. The coaching sessions are sparsely shown, and it takes more than an hour for Torbaaz to actually show some cricket. Most of the blame falls on the writing and the editing, while Malik's handling of such sensitive themes leaves a lot to be desired. OTT Releases Of The Week: Meryl Streep's The Prom on Netflix, Bhumi Pednekar's Durgamati on Amazon Prime, Adah Sharma's Pati Patni aur Panga on MX Player and More.

It also doesn't help that Torbaaz reeks influences from Chak De India, Lagaan and even Rang De Basanti. Lagaan, especially, sees itself as a major inspiration factor in the final cricket match, as Naseer's Torbaaz team (why the team is named so is never explained) takes on a team run by the local academy. The match may be played in a thrilling way, but it lacks the tension that was sorely needed in the sequence.

Still, the second half of Tobaaz feels comparatively better, when Rahul Dev's Qazar gets to have significance in the plot, we get more cricket and after that lacklustre match, the ending offers some emotional punch.

The villain is a sore point of the film too. While Rahul Dev is excellent in the role and bring out the required menace, his Qazar is terribly written. Why would he spare Naseer when the latter comes to request him to leave the kids in his camp? Normally, he should have shot him down. Also, why was he physically present for the finale, to oversee the bombing of a kiddie match, when he is the most wanted man in the country, even if the army thinks he is dead?

Nargis Fakhri is wasted in the film; in fact, producer Rahul Mitra (in a casting of self-pandering) who played an Afghani colonel had more lines than her (while also leading to a random conversation in the middle of the match, where Naseer inquires about his dead brother). Nargis Fakhri Birthday Special: Showing Us How a Little Glamour, Some Sass and Oodles of Spunk Go a Long Way!

- Slow Pace In the First Half

- Rushed Editing of Important Sequences and Hazy Writing and Execution

Torbaaz struggles to create an emotional driving narrative out of an already affecting premise. Even with Dutt's presence and some natural child actors, the film lacks the punch to either be a good sports drama or a moving anti-terrorism saga. Torbaaz is streaming on Netflix.

(The above story first appeared on LatestLY on Dec 11, 2020 05:32 PM IST. For more news and updates on politics, world, sports, entertainment and lifestyle, log on to our website latestly.com).