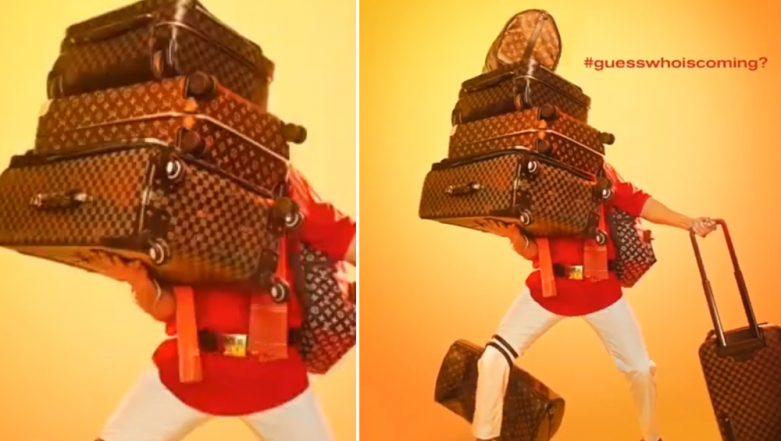 Varun Dhawan and Sara Ali Khan have started shooting for Coolie No 1 remake in Bangkok and its teaser video is out already. It's more of a movie announcement and deets of which will be revealed only later. The Badlapur star took to his social media accounts to announce his next project and it looks as happening as the original. Earlier Varun stepped into Salman Khan's shoes for the remake of Judwaa and now, he's gearing up to pay an ode to Govinda.

In the newly released video, Varun is dressed in his Coolie's uniform while hiding his face behind different bags. Now we wonder if passengers travelling on a train or bus are so rich to afford Louis Vuitton bags or it's a mere production fail on the makers' part. Anyways, that's a topic to discuss for some other day and today let's focus on the film's first look that will be unveiled tomorrow (August 12). Varun Dhawan Starts Prep for Coolie No 1 and Shows Why He's the Best Choice for the Film With His Hilarious Antics in This New Video.

Varun and Sara's Coolie No 1 remake will hit the screens on May 1, 2020, and clash with Scarlett Johansson's Black Widow movie that's slated to release on the same day. While there were reports if Alia and Varun will collaborate for one more time with this remake, David Dhawan was keen on casting Sara Ali Khan. And she eventually came on board.