Vidyut Jammwal vs Disney+ Hotstar: Fans Come Out in Support of Khuda Haafiz Star After Latter Calls Out the OTT Platform For Ignoring His Film (View Tweets) 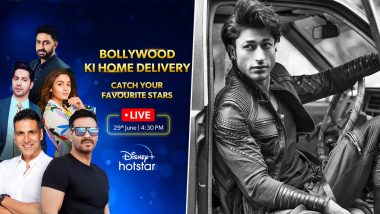 With the nepotism debate still up and running in India, B-Town and B-Towners have received a lot of flak over the past few days. Ever since nepotism in Bollywood was deemed to be one of the reasons for actor Sushant Singh Rajput suffering from depression and dying by suicide, actors, especially those who come from film families, have been bearing the brunt for having snatched lucrative opportunities from non-industry deserving artists. And while this is one debate that will never cease to exits in Bollywood, actor Vidyut Jamwal once again pointed out the ugly side of nepotism- one that he has been facing. As Disney+ Announces Its Virtual Press Conference with Akshay Kumar, Ajay Devgn and Other B-town Stars Fans Speculate the OTT Announcement of Laxmmi Bomb, Bhuj: The Pride of India and the Rest

Streaming giant Disney+ Hotstar has organised a virtual press conference to July 29, to announce the news of 7 Bollywood movies - Akshay Kumar's Laxmmi Bomb, Alia Bhatt's Sadak 2, Varun Dhawan's Coolie No: 1, Ajay Devgn's Bhuj: The Pride of India, Abhishek Bachchan's The Big Bull, Vidyut Jammwal's Khuda Hafiz and Kunal Kemmu's Lootcase. However, the last two movies saw no mention of either their movies or were they invited to the press conference. Vidyut Jammwal Calls Out Bollywood and Disney+ Hotstar For Snubbing His Movie Khuda Hafiz, Says 'The Cycle Continues' Hinting at Nepotism (View Tweet)

And Vidyut did not take this incident lying down. He took to Twitter to call out Bollywood and Disney + Hotstar for not even informing and inviting him to this press conference and not promoting his movie and another, Kunal Kemmu's Lootcase. Vidyut Jammwal Has A Heart-Winning Response When Asked Why He Didn’t Pen Any Remembrance Post on Sushant Singh Rajput’s Demise.

A BIG announcement for sure!!

7 films scheduled for release but only 5 are deemed worthy of representation. 2 films, receive no invitation or intimation. It’s a long road ahead. THE CYCLE CONTINUES https://t.co/rWfHBy2d77

In his tweet, Vidyut clearly mentioned how only 5 out of 7 films releasing on the streaming platform were 'deemed worthy of representation' because (obviously) they starred big actors. "It’s a long road ahead. THE CYCLE CONTINUES," read Vidyut's tweet, where he is, no doubt, referring to nepotism and favouritism in the Bollywood industry. And soon, Twitterati arrived in support of Vidyut and called out B-Town, big time.

Justice For Vidyut and Kunal:

This is really not fair to remaining 2 films @VidyutJammwal I think one movie is yours #KhudaHaafiz & second one is Kunal khamu's Lootcase. The both movies cast or crew members deserve invitation or any intimation about this. Love you @VidyutJammwal We Jammwalions always with you

Dear @VidyutJammwal indeed it is a long road ahead and you will face several hurdles but worry not. We fans are always with you. Stay strong dost....

An Unhealthy Attitude By Organisers:

Why are the 2 films receiving no invitation or intimation? Definitely a big question! Why #Bollywood excludes some artists from their so called "fraternity" and only promote a few artists? So this BIG announcement wants to promote only 5 movies? Really an unhealthy attitude!

This is called #Nepotism. The announcement they're coming is 4 their films. Whereas even #VidyutJammwal 's movie #Khudahafiz is also gonna be announced. But he isn't invited 4 this so called chat.

Vidyut Jammwal In War? Who Thought?

Vidyut, in my opinion you’re the one who is highly ignored by these Bollywood mafias,now a days dis nepotism debate is doing d round on social media nd all news channels due 2 Sushant’s demise but I always thought wat would be d result of WAR, if u are in place of @iTIGERSHROFF

Unfair Treatment To Vidyut and Kunal:

This is totally unfair. They should've invited you and @kunalkemmu to be a part of this. #BollywoodKiHomeDelivery

The whole Nepotism debate in B-Town was first kickstarted by Kangana Ranaut and it flamed up again after actor Sushant Singh Rajput ended his life on June 14, owing to depression.

(The above story first appeared on LatestLY on Jun 29, 2020 04:27 PM IST. For more news and updates on politics, world, sports, entertainment and lifestyle, log on to our website latestly.com).