Hina Khan Is Finally Back In Town From Europe, Gets A Warm Welcome From Her Mom And Brother 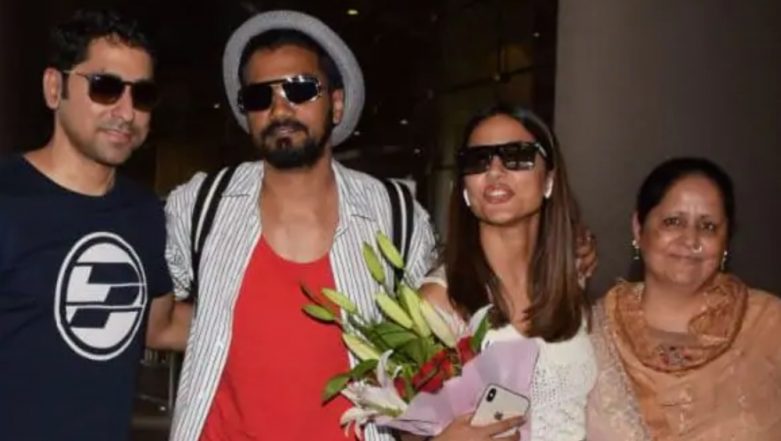 Hina is finally back in Mumbai after more than two weeks

Look who is back in town. We are talking about Hina Khan, who returned to Mumbai after spending about two weeks in Europe. The actress left for the French Riviera bid adieu to Mumbai in the second week of May for her debut appearance at the Cannes Film Festival 2019. She made everyone go gaga with her outing at the red carpet. For her maiden Cannes appearance, Hina slipped into a gown made by Lebanese designer Zaid Nakad. She also hung out with Priyanka Chopra and her husband Nick Jonas, along with Diana Penty and Huma Qureshi, who also walked the red carpet at Cannes.

Post that Hina was shooting for her film, Wish List, before finally returning to the city last night along with beau, Rocky Jaiswal, who accompanied her to Europe. The actress wore a white crop top  which she paired with palazzo pants. Hina's mom and brother, Aamir came to receive her at the airport. Needless to say, she got a very warm welcome from her family members. Hina has returned in time to celebrate Eid with her fam jam. Hina Khan’s Latest Outing Will Give Even the Parisians a Run for Their Money (View Pics).

Check out the pictures of Hina at the Mumbai airport right here:

Talking about Wish List, it is directed by Rahat Kazmi and also stars British-Indian actor Jitendra Rai. Hina walked the red carpet at Cannes Film Festival to unveil the poster of her other film, Lines, in which she plays a Kashmiri girl living near the LOC in Kargil. The film is written by Rahat and directed by Hussain Khan. Check out the poster here:

It's so good to see Hina back in the city. Mutual thoughts? Let us know by tweeting to us @LatestLY.