Adam Sandler, Charles Esten and Other Celebs React to the Sudden Demise of the Disney Star Cameron Boyce (Read Tweets) 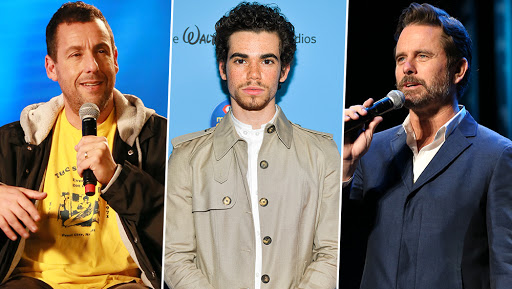 Washington D.C: Adam Sandler and Charles Esten among other celebrities mourned the death of Disney actor Cameron Boyce who passed away on Saturday (local time).Boyce essayed the role of Sandler's onscreen son in the 2010 comedy film Grown Ups. The latter remembered him in an Instagram post where he said that he loved that kid."Too young. Too sweet. Too funny. Just the nicest, most talented, and most decent kid around. Loved that kid. Cared so much about is family. Cared so much about the world. Thank you, Cameron, for all you gave to us."Sandler added that there was more on the way and continued writing, "So much more was on the way. All our hearts are broken. Thinking of your amazing family and sending our deepest condolences." Cameron Boyce’s Last Picture before His Death Leaves Fans in Tears

Meanwhile, Eston who shared the screen space with Boyce on the comedy series 'Jessie' as the latter's onscreen father, also mourned his demise.In a series of tweets, he penned his emotions."My family and I are devastated today, by the loss of our young and amazing friend, Cameron Boyce. Years before I was blessed to play his father on JESSIE, we were blessed to know him and his wonderful family at the elementary school our kids all attended together," he wrote in the first tweet. He continued, "It was there we were introduced to his endless talent, kindness, and joy for living. At his very 1st talent show, little Cameron's dancing lit up the stage, and left everyone on their feet, cheering."He added that Boyce was destined to become a star one day. "Cameron never carried himself with anything but kindness, humility, effortless grace, and great humour. Cameron Boyce Death: Here Are A Few Things You Need To Know About The Late 20-Year-Old Star

Even as his star ascended with JESSIE, and he began to receive the type of fame that can change people, I never saw that change. Not even a little."He concluded his tweets by writing, "Rest In Peace, Cameron. You will be dearly remembered, my friend, and you will be greatly missed."Other actors who also remembered the slain actor include Jordan Fisher, James Charles, Mace Coronel, Gregg Sulkin, Kenny Ortega, Skai Jackson. The 20-year-old died in sleep "due to a seizure which was a result of an ongoing medical condition," Fox News cited ABC News.

Our love and heartfelt prayers go out to them, and most especially, to the Boyce family. Your Cameron was a blessing to us, as he was to so many others in this world. May you feel the breadth of love being poured out for him today, and may God comfort you as you mourn./5

Love you Cam. Your laughter, compassion and heart for humanity will be forever missed. We are all better for knowing you and your love. pic.twitter.com/Xqy5gt2En3

rest in peace to cameron boyce 😞 he was so young, incredibly talented, but also one of the kindest ppl I’ve ever met. sending love to his friends & family 💔

Now I wish I had sent that message. Just so he personally knew how highly I thought of him and how much admiration I had for him. My heart goes out to his family & his close friends. Cameron, you were and still are a star. May god bless you in heaven. You will be missed down here

✨Cameron ✨ May the Love and Light you spread throughout your brief life, soar you with flight into the heavens above. You were already an Angel in life. The Legacy you leave is magnificent! Love You My Forever Boy.… https://t.co/vHDLVVffEf