Ahead Of Tenet's Release, Christopher Nolan's Dark Knight Trilogy to Re-Release in Hong Kong in June

Hong Kong fans of Nolan will be in for a treat as they will get to witness in theatres once again, the filmmaker's Batman trilogy as it is being re-released by Warner Brothers. 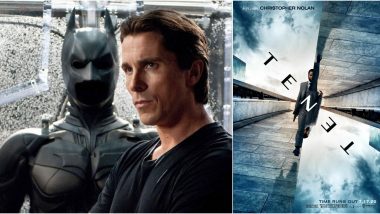 While several other countries across the globe are still facing a lockdown, theatres in Hong Kong are cautiously reopening in their post lockdown phase. Just as things are about to get normal, the theatres have already begun to prepare themselves for the upcoming big releases including Christopher Nolan's Tenet in July. Hong Kong fans of Nolan will be in for a treat as they will get to witness in theatres once again, the filmmaker's Dark Knight trilogy as it is being re-released by Warner Brothers. Robert Pattinson Expected to Boost His Star Power with Christopher Nolan's Tenet and Matt Reeves' The Batman.

In a big surprise, it was recently confirmed by a report in Hollywood Reporter that Christopher Nolan's Batman films starring Christian Bale will be hitting the screens of Hong Kong theatres in June. The movies will be screened in select Hong Kong cinemas, including Imax. This news is sure to get all Nolan fans excited and after the pandemic keeping them away from theatres for so long, this is surely going to be a big treat. Tenet Trailer: Christopher Nolan's Thriller Looks Gripping (Watch Video).

As for Nolan's upcoming film, Tenet, the first trailer of the film dropped in January and we hear another one is slated to drop soon. The film's release date has been maintained to be July 17 since the start and it is yet to be determined if theatres across US and UK will reopen by then. The film is one of the biggest releases of the year and if the theatres reopen by then, it will be the first biggie to hit the screens. The film stars ohn David Washington, Robert Pattinson, Elizabeth Debicki, Dimple Kapadia, Michael Caine, and Kenneth Branagh in key roles.

(The above story first appeared on LatestLY on May 18, 2020 11:49 AM IST. For more news and updates on politics, world, sports, entertainment and lifestyle, log on to our website latestly.com).