The trial will take a one-week break before testimony resumes on May 16, when Heard will return to the stand. She is yet to complete her direct testimony, and Depp's lawyers will then have the opportunity to cross-examine her. Judge Penney Azcarate told the jury that closing arguments are set for May 27. 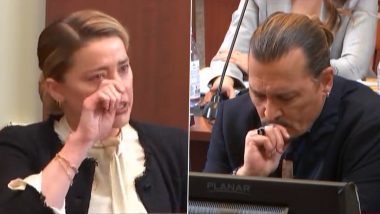 Hollywood actress Amber Heard broke down as she told a jury that her former husband and actor Johnny Depp had sexually assaulted her with a bottle during a fight in Australia. According to 'Variety', Heard took the stand for the second day on Thursday, as she continued to recount a series of violent incidents that marked their relationship. She said the fight in Australia during filming of the fifth 'Pirates of the Caribbean' film in March 2015 was prompted by Depp's jealousy and her concern about his drug use. Johnny Depp vs Amber Heard Defamation Trial Day 14 - Watch Live Streaming & Coverage of Court Proceedings from Virginia.

She said Depp had repeatedly hit her, threw bottles at her and choked her against a refrigerator, before finally getting her on top of a countertop and penetrating her with a bottle. "I remember just not wanting to move," 'Variety' quoted the actress as saying. She said she remembered thinking: "Please, God, I hope it's not broken." She said Depp repeatedly said: "I'll f***ing kill you."

Heard is defending herself in a $50 million defamation trial. Depp has accused her of fabricating her domestic violence allegations to advance her career. His lawsuit alleges that he lost out on the sixth 'Pirates of the Caribbean' film and other movie roles after Heard referred to herself as a "public figure representing domestic abuse" in a December 2018 op-ed. Heard began her testimony on Wednesday afternoon, recounting how she first met Depp and fell in love with him. Amber Heard vs Johnny Depp Defamation Trial: Here’s The Moment When The Former Married Couple Almost Run Into Each Other In The Courtroom (Watch Video).

"I wanted to marry him so bad." #AmberHeard cries on the stand while describing to the jury her and #JohnnyDepp's Hollywood romance gone wrong. What do YOU think? Genuine tears or good acting?

But she said she also discovered that Depp could become extremely jealous, especially when drunk or high, and fly into rages. On Thursday, she told the jury about a flight on a private jet in May 2014, when she claimed that Depp slapped her and then kicked her to the floor. She also told the jury of other violent episodes, in Tokyo, and on Depp's private island in the Bahamas. She said Depp could be verbally cruel, calling her a "wh***", a "s**t" and a "fat a**".

Depp has denied ever assaulting Heard. He already told the jury his own version of events surrounding the Australia fight, alleging that she severed his fingertip when she threw a bottle at him. Heard has previously testified about these incidents during a trial in the UK, but the details of the alleged sexual assault were kept confidential in that proceeding.

In her testimony on Thursday, Heard also said she ended up with cuts on her arms and feet from the broken glass. She said, at one point, Depp had held a broken bottle to her jaw, and threatened to "carve up my face". She said the next morning she found a series of messages that Depp had written on the walls in his own blood and in paint. Heard also told the jury about a fight in December 2015, when she said that Depp dragged her by the hair up the stairs. He said the two got into a shoving match, and that Depp head-butted her squarely in the nose.

She said she instantly felt searing pain in her nose. Depp previously testified that he was trying to restrain Heard from hitting him by putting her in a bear hug, and the contact was incidental. Later that night, Heard said that she told Depp that she was going to leave him. She said that Depp dragged her into another room, threw her on a bed, and kneeled on her back.

The trial will take a one-week break before testimony resumes on May 16, when Heard will return to the stand. She is yet to complete her direct testimony, and Depp's lawyers will then have the opportunity to cross-examine her. Judge Penney Azcarate told the jury that closing arguments are set for May 27.

(The above story first appeared on LatestLY on May 06, 2022 10:55 AM IST. For more news and updates on politics, world, sports, entertainment and lifestyle, log on to our website latestly.com).