Creed II Trailer: Michael B Jordan and Sylvester Stallone's Return to the Ring Brings Back a Popular Adversary

Creed II is all set to release in November 2018. 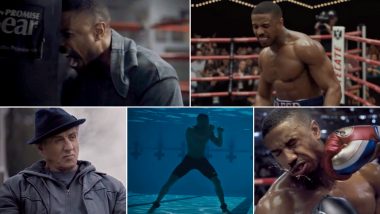 When Creed came out in 2015, it was initially looked upon as an unwanted movie that rode on nostalgia. The spin-off based on the fame Rocky series, however, went on to impress both the audiences and the critics with its superb execution, incredible performances and heart-felt storytelling. The lead star, Michael B Jordan, won a lot of adulation for the title role, while Sylvester Stallone went to get an Oscar nomination playing the retired boxer Rocky Balboa.

Now the sequel is on the way, Creed II, that brings back the main cast from the first movie. However, instead of Ryan Coogler, who directed Creed (and also the awesome Black Panther), Creed II will be directed by Steven Caple Jr. The first trailer has landed and it has some amazing training and boxing sequences. There is also a return of a popular adversary from the Rocky series. The ferocious Russian boxer, Ivan Drago, played by Dolph Lundgren, is making a return to the franchise with Creed II. The trailer might not show a glimpse of the character, but we do see his son, Viktor Drago played by Florian Munteanu, who is all set to box against Creed. Interestingly it was Ivan who had killed Creed's father Apollo in a boxing match years ago.

Creed II also stars Tessa Thompson. Here's the official synopsis of the movie - "Life has become a balancing act for Adonis Creed. Between personal obligations and training for his next big fight, he is up against the challenge of his life. Facing an opponent with ties to his family’s past only intensifies his impending battle in the ring. Rocky Balboa is there by his side through it all and, together, Rocky and Adonis will confront their shared legacy, question what’s worth fighting for, and discover that nothing’s more important than family. Creed II is about going back to basics to rediscover what made you a champion in the first place, and remembering that, no matter where you go, you can’t escape your history."

Creed II is all set to release in November 2018.

(The above story first appeared on LatestLY on Jun 21, 2018 12:01 PM IST. For more news and updates on politics, world, sports, entertainment and lifestyle, log on to our website latestly.com).