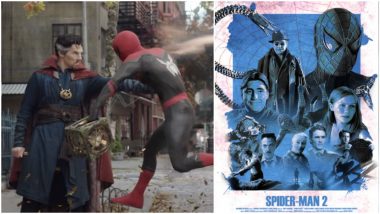 The first trailer of Spider-Man: No Way Home have elicited a tremendous response from Marvel fans, who have been clamouring it for months now. Directed by Jon Watts, the movie is the third film focussing solely MCU's Spider-Man. But we know that Tom Holland's Peter Parker is not the only cinematic live-action Spider-Man we have seen in this century. Spider-Man: No Way Home is racking up a multiverse with some help from Benedict Cumberbatch's Doctor Strange and the action is going to link the film with previous franchises having webbed crawler in the lead. Spider-Man No Way Home Trailer: Reckless Doctor Strange, Multiverse, Doc Ock and More – 8 Things We Learnt About the Plot of Tom Holland’s Upcoming Marvel Film.

Speaking of Sam Raimi's Spider-Man movies, let's not forget how great they were and how they teased some interesting Easter Eggs that did come true, albeit years later. If you are excited seeing Spider-Man, Doctor Strange and Doc Ock in Spider-Man: No Way Home, then let's remind you that Spider-Man 2 had teased about it way back in 2004. Sam Raimi's Spider-Man 4 Throwback: From Cast to Plot, How The Shelved Superhero Film Would Have Turned Out If It Was Greenlighted.

While the film had a Peter Parker in Tobey Maguire and the main antagonist in Doc Ock, Spider-Man 2 also hinted that Doctor Strange was also part of the universe. Although we sadly never got to see him, his presence was confirmed in this hilarious exchange between JK Simmons' J Jonah Jameson (Simmons deserve to be JJJ in all universes) and his subordinate, as they try to figure out what to name Molina's newly emerged villain. Doctor Strange is one of the names thrown about, which is dismissed by JJJ because it's already 'taken', before he settles for Doctor Octopus. Before Spider-Man: No Way Home, 5 Other Comic Book Films That Suffered From Premature Trailer Leaks.

It looks like MCU honco Kevin Feige was a huge fan of this movie, and decided to make the above universe-baiting a reality. Also, let's not forget that Sam Raimi is now making Doctor Strange in the Multiverse of Madness. It's all connected, Spider Lord!

(The above story first appeared on LatestLY on Aug 24, 2021 12:34 PM IST. For more news and updates on politics, world, sports, entertainment and lifestyle, log on to our website latestly.com).