Emma Watson Asked to Not Give Long Speeches by Students of Delhi University, Here’s Why

The request came after students of Delhi University were asked questions on the basis of Emma's United Nation speech. Their entire paper was based on her one speech and students did not take it well. 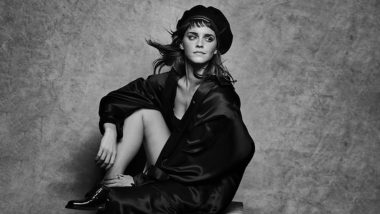 We often get to see students do hilarious stuff using Bollywood and Hollywood references. It was a few months back when the news about a student using Emraan Hashmi and Sunny Leone's names as his parents' name for a admit card came out. The actors had even reacted to the news and it all turned out to be a very funny incident. Now, a bunch of college-going students have written to Emma Watson asking her to not give long speeches at events. Emma Watson Says She Is Self-Partnered and Not Single, Twitter Hails the Actress.

The request came after students of Delhi University were asked questions on the basis of Emma's United Nation speech. Their entire paper was based on her one speech and students did not take it well. They bombarded the actress' social media with messages. It all started a hashtag saying #CampusKhurafat when a bunch of students decided to spam the actress just for fun. The number of students then grew to a huge number with almost all the students who appeared for the exam dropping a message to Emma.

“Bahut funny scene ho gaya tha. After attempting an entire paper on Emma Watson’s speech we decided to let her know how it felt and how our hands were paining because didi decided to give speeches on international platforms. Yeh kya na insaafi hai yaar, I mean poora paper based on one speech? Jaante hai you were Hermoine in Harry Potter magar bachho pe rehem karo, speech dena band karo,” Aatika Chaudhary, a student of Vivekananda College, revealed to Hindustan Times.

Aarushi Singh, a student of Daulat Ram College, said, “It was supposed to be a funny outburst. One of my friends did it and the rest thought it was funny so a chain got created I think. Every person who did it shared the screen shot of the chat on their Instagram story and soon the trend became viral. Ab online exams ke time, there needs to be some campus fun na! The off side of living an online campus life is campus main khurafat nahi kar pate zyaada." Harry Potter Actress Emma Watson Takes a Stand Against JK Rowling's Transphobic Tweets.

“Arre that would have been epic! Humara prank successful ho jaata, but I think since the messages were sent in Hindi, she wouldn’t have understood. I mean how would she understand - Ek reel dekhi thi 30 second ki maine aapki us interview pe, yeh nahi socha tha vahi reel teen ghante ka paper ban jayegi,” says Akshita Chauhan, another student of Daulat Ram College added. While the students are hoping that Emma notices their messages, we dont think it is likely to happen.

(The above story first appeared on LatestLY on Mar 30, 2021 08:24 PM IST. For more news and updates on politics, world, sports, entertainment and lifestyle, log on to our website latestly.com).