Grammys 2020: Bangtan Boys, BTS Rehearsing Hard for the Biggest Night In the Music Industry Is All Things Amazing (Watch Video) 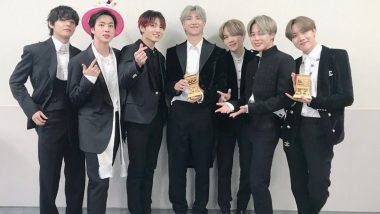 The world is waiting with bated breath for the biggest night in the music industry to commence. Yep, you got it right, we are talking about the upcoming Grammy Awards 2020 which is all set to take place on January 26, 2020. While this year many deserving artists are nominated, the sad part is that the K-Pop hotties, BTS are not part of the coveted list. But well, that has not stopped the boys' band from making in the news. As we all know that the Fake Love boys are going to make their debut on the Grammys stage with a Korean act alongside Lil Nas X, Billy Ray Cyrus, Diplo and Mason Ramsey. What an explosion indeed! BTS At Grammys 2020: From Boy With Luv to Mic Drop, 5 Songs That the K-Pop Hotties Should Perform at the 62nd Annual Grammy Awards!

BTS will be joining the others for the Old Town Road All-Stars segment. However, fans on social media had earlier trended how they want to see the BTS group performing solo at the awards night. While we are not sure if a solo gig is in process, but for now, we have got a glimpse of what we can expect from RM, Jin, Suga, Jimin, Jugkook, J-Hope and V. A video from Grammys 2020 rehearsals has been leaked online which sees the young lads practising. BTS Does Not Get a Single Nomination at Grammys 2020 and Army of Fans Make #ThisIsBTS Trend on Social Media!

Check Out The Rehearsal Video of BTS Below:

Well, this sneak peek is surely HUGE for all BTS fans as to why not, the sensations will be creating history by performing for the first time at 62nd Annual Grammy Awards. Also, if you are the one who is confused about where and how to watch the Grammys; click here. Stay tuned to LatestLY for more updates from the world of showbiz.

(The above story first appeared on LatestLY on Jan 25, 2020 04:46 PM IST. For more news and updates on politics, world, sports, entertainment and lifestyle, log on to our website latestly.com).