Jim Carrey Birthday Special: From Joel Barish to Truman Burbank, 5 Best Serious Roles of the Comedian That Show Off His Great Range! 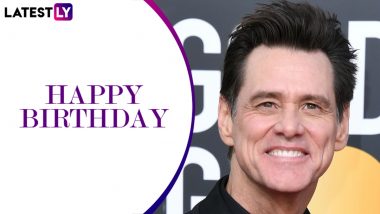 Jim Carrey is mainly known to be a great comedian through and through. Some of his best roles have been those of playing comic reliefs and bringing a laugh to everyone. Carrey started off his career and made it big by playing the roles of Ace Ventura and the Mask. People have known him for his slapstick comedy and greatly incorporating his own physicality into it. That alone makes Jim Carrey a joy to watch on screen. Even when the films are a dud, he somehow makes everything more interesting with his performance. For example, Carrey’s performance as the Riddler in Batman Forever really heightened the enjoyment factor of that movie. While Carrey is mostly known for his comedic chops, many forget that he is a great character actor too. Jim Carrey to Play Supervillain MODOK in Marvel Cinematic Universe - Reports.

While Jim Carrey’s career is popular for playing the roles of comedic characters, he has a great talent for playing serious characters too. If you have watched any of his work ranging from The Truman Show to Eternal Sunshine of the Spotless Mind, then you would know that he has some really great range as an actor. So to celebrate Jim Carrey’s 61st birthday, we are taking a look at five of his best serious roles that show off his great acting range. Jim Carrey Reveals He Is Not a Fan of AI and How Amazon’s Alexa Freaks Him Out.

The Hermit (The Bad Batch)

Say what you want about The Bad Batch, sure it was a bit long but it still packed in some great visuals. Carrey starred in this dystopian thriller where he had a short time playing a hermit. Almost unrecognisable in the role, Carrey sold his performance with the limited screen time and again established why he is just more than a comedic actor.

Andy Kaufman (Man on the Moon)

A biographical film on the late Andy Kaufman, Man on the Moon sees Carrey step into the role of the comedian. In what is one of the best performances of his career, Carrey loses himself in the role as the film chronicles around his life starring in various shows of Kaufman’s career. Carrey received so much acclaim for this role that the Oscar snub of him caused a huge uproar.

In a story that’s all about loss and forgetting the past, Carrey gives a powerhouse of a performance as Joel. Joel, who recently went through a breakup, is trying to forget everything about his ex-girlfriend via a medical procedure. What follows is one of Carrey’s most emotionally driving performances to date that gives this sci-fi romance the flair it needs.

Kidding is a show that sees Carrey jump into the role of a star on a children’s television program. In this role, Carrey portrays a man whose personal life is deeply troubled while he puts on a more positive image on screen. The role directly deals with some of Carrey’s own lifelong issues and it’s a great character deep dive. It’s a shame that Kidding was cancelled after two seasons as it’s some of Carrey’s best recent work.

Well what would it be like if you are living your life and it’s being telecasted for everyone without you ever knowing about it? Well that’s what The Truman Show tries to tell us with Jim Carrey at the centre. The role of Truman Burbank is a career highlight of Carrey’s as he gave a truly great performance which cemented him as an actor of versatile range.

While Carrey again is back in the comedic scene with Sonic the Hedgehog, I hope he does consider going back to some more serious roles. They truly encapsulate what’s best about him and show off his versatility as an actor. With this we finish off the list and wish Jim Carrey a very happy birthday.

(The above story first appeared on LatestLY on Jan 17, 2022 02:58 PM IST. For more news and updates on politics, world, sports, entertainment and lifestyle, log on to our website latestly.com).