His debut song, Baby became one of the highest certified singles of all time in the US. He also became the youngest solo male act to top the chart in 47 years. Bieber is one of the best-selling music artists of all time. 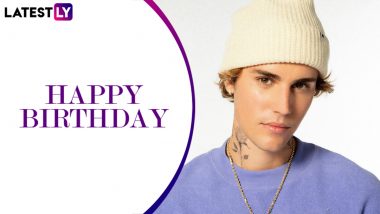 Every 90s kid has grown up listening to Justin Biber. And no matter how old we grow up to be, we think he is that one singer we will never stop listening to. From his debut song Baby, which was a huge hit, to his recent songs like Yummy, Peaches, etc - the singer has managed to make his audience groove on the quirky beats of his songs. The evolution of his music videos is also quite noticeable, so much that we literally have seen him grow into the compassionate, hardworking, talented and creative artist that he is today. Justin Bieber Shares Anxiety Tip on Instagram; What is the Grounding Technique?

His debut song, Baby became one of the highest certified singles of all time in the US. He also became the youngest solo male act to top the chart in 47 years. Bieber is one of the best-selling music artists of all time, with estimated sales of over 150 million records worldwide and numerous accolades. The singer has won two Grammy Awards, one Latin Grammy Award, two Brit Awards, one Bambi Award, 21 Billboard Music Awards, 18 American Music Awards, a record 21 MTV Europe Music Awards, six MTV Video Music Awards, 23 Teen Choice Awards, and 32 Guinness World Records.

Today marks Bieber's 28th birthday, and to celebrate the same, we are looking back at 5 old songs by the singer that are simply gold.

Check Out The Songs Below:

Bieber continues to surprise his fans with new songs. At the beginning of the year 2022, he broke the all-time record for the most monthly listeners in Spotify history. He achieved a peak of 94.68 million monthly listeners on the platform to date.  Ghost, the sixth single from his album Justice, peaked at number eight on the Billboard Hot 100, which marked his 26th career top-ten hit on the chart. In the same week, the song reached number one on Billboard's Pop Songs chart, making Bieber the first male solo artist to have 10 number-one singles in the chart's history.  Justin Bieber ‘Models’ for Kim Kardashian’s SKIMS in LA Billboard Mishap, Hilarious Pic Goes Viral.

Seems like the singer will always be creating history with his work and achieving new accolades every time. We wish to see him grow more and more every day. Join us in wishing him a very happy birthday.

(The above story first appeared on LatestLY on Mar 01, 2022 10:31 AM IST. For more news and updates on politics, world, sports, entertainment and lifestyle, log on to our website latestly.com).