Kevin Costner Birthday Special: From Waterworld to Man of Steel, 5 Critically Reviled Movies of the Actor That Deserve a Second Chance Today!

Luckily over the years these films have been seen in a more positive light by audiences, with many engaging in passionate conversations over them online. So to celebrate Kevin Costner’s 67th birthday, we are taking a look at five of his most critically reviled films that deserve a second chance today. 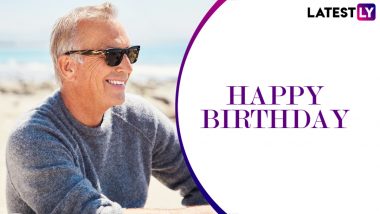 Kevin Costner by no doubt is one of the best actors working today. He is an actor with great range that manages to deliver great performances constantly. Costner has built up a career over playing characters with great struggle within them. Sometimes his characters deal with moral dilemmas or are just trying their best to help people, as visible in Robin Hood. Costner also has a great built up cinematography that compliments his career extremely well. Some of his biggest releases being The Untouchables, Field of Dreams and Dances with Wolves, these movies launched him into the acclaimed actor he is today. Kevin Costner Birthday Special: 7 Movies of Hollywood Legend That Inspired These Bollywood Flicks of Shah Rukh Khan, Aamir Khan, John Abraham (LatestLY Exclusive).

But, while Costner has enjoyed a great career, he also has some movies that have taken some serious hits. With the likes of Waterworld and Robin Hood, Costner had some huge critical failures that at times were panned by many. Luckily over the years these films have been seen in a more positive light by audiences, with many engaging in passionate conversations over them online. So to celebrate Kevin Costner’s 67th birthday, we are taking a look at five of his most critically reviled films that deserve a second chance today. Kevin Costner Reveals Robin Williams Almost Played His Role in 'Field of Dreams'.

Kevin Costner and Robin Wright star in this romantic film that sees a woman find a romantic letter washed ashore in a bottle. She tracks down the author of it and falls in love with him when she realises that he is writing to his dead wife. Message in a Bottle was panned heavily upon its release, but honestly it’s a really fun romantic drama with a unique concept that definitely deserves a second chance.

The Guardian, like its name suggests, features a legendary saviour who saves people lost at sea. The film stars Costner alongside Ashton Kutcher and focuses on the United States Coast Guard. The film was heavily criticised for being clichéd, but overall it’s an enjoyable time that will definitely leave you satisfied.

Like the name suggests, Prince of Thieves tells the story of Robin Hood. Costner portrays Robin Hood in a performance that’s actually quite enjoyable, but the show stealer here is Alan Rickman. The late and great Alan Rickman makes the film so much better than it had any right to be. If there is a film that should be given a second chance, this is it.

While contemporary discussions of this film have been more positive, it still does receive quite the unnecessary hate online. Given that it’s a different take on the Superman mythos, it is still quite the fun and experimental film that requires more discussion. People do take some issues with Costner’s portrayal of Pa Kent as well, but honestly it does deserve a second chance.

If there ever is a film that does deserve a second chance, then Waterworld will top that list. After the entire world has its water level risen due to the polar caps melting, it results in earth becoming a world filled with water like the title suggests. The film focuses on an anti-hero played by Costner. While there are definitely issues with the movie, it doesn’t deserve the reception it gets. It is genuinely a fun time and some of the most unique sci-fi concepts you can get from the year it was released.

It’s great to see that some of Costner’s films are getting a second chance online. They do deserve it because so much of his work is actually fun. With this we finish off the list and wish Kevin Costner a very happy birthday.

(The above story first appeared on LatestLY on Jan 18, 2022 09:30 AM IST. For more news and updates on politics, world, sports, entertainment and lifestyle, log on to our website latestly.com).