We often forget the power of good literature and how it can make sense decades later and leave everyone with takeaways that they need as per their generations. 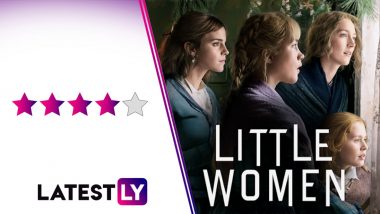 Little Women Movie Review: As someone who has enjoyed literature reading and not just as a part of school work, Louisa May Alcott's Little Women seemed like a great reading at the time, mainly because it was based on the story of four sisters. Having a sibling myself, the relatability factor weighed high but it's only after and I read the same book again, later in an older age did I realise why the book is truly honoured when it comes to expressing ideas of feminism, especially at a time in the 1800s. Director Greta Gerwig with a film like Ladybird surely showed that she's interested in telling stories about women the right way and it only made sense for someone like her to take on an adaptation of Little Women. While there have been a ton of discussions online about the need for another Little Women film given that it has been adapted ample of times before, I felt like there couldn't have been a better time to tell this story. We often forget the power of good literature and how it can make sense decades later and leave everyone with takeaways that they need as per their generations. Emma Watson Shares Picture from Sets of Greta Gerwig's Little Women.

Following Alcott's text, Gerwig's film chronicles the story of the March sisters, Jo (Saoirse Ronan), Amy (Florence Pugh), Meg (Emma Watson) and Beth (Eliza Scanlen) who live along with their mother Marmee (Laura Dern) in Concord, Massachusetts with their beloved friend Laurie (Timothee Chalamet) as their neighbour. The film shuttles in two timelines as we meet each of the March sisters first in their older years and later their younger selves. The film opens to Ronan's Jo calming her nerves outside a publisher's office with her fingers full of ink. She makes her way in, pitches him to run a story written by her 'friend' and takes money in return after his approval and refuses to even take credit for the story. That's Jo March for you, someone who'd go to extra lengths to earn some money for her family. In her teenage years, we see her chopping off her hair and selling them to help earn some money. "I only sold what was my own" she says when she comes home looking like a young boy.

As for the other sisters, Emma Watson's Meg manages to bring the perfect balance of being a young girl who often gets drawn in the world of her rich friends and as an adult someone who is aware of her circumstances.  She doesn't mind being called 'Daisy'  by her rich friends and even explains to Laurie (Chalamet) who is unimpressed by her pretentious transformation at a ball that she'd just like to be 'daisy' for a day. As a matured married woman with kids, she tries hard not to give into temptations of splurging on herself whilst managing a lean household after marrying professor John Brooke (James Norton). Much like the book, Eliza Scanlen's shy Beth is content when playing the piano and watching her sisters bicker with each other. Although if there's a counterpart to Jo's stubbornness and temper, it is her younger sister Amy (played magnificently by Florence Pugh) who for many who read the books remained a hated character but under Gerwig's direction, gets a brilliant character arc. As a child, Amy is often miffed for being left out by her older sisters Meg and Jo but as a young adult, living with Aunt March (Meryl Streep) in Europe, she's turned into an artist with strong ideals and opinions and understands the real meaning of March's advice for her about 'marrying rich'. In the midst of all this female energy, Gerwig also makes sure to throw light on Chalamet's Laurie, who's kiltering away due to his privilege and handsome looks. Laurie's confrontations with both Jo and Amy make for some brilliant scenes. The one that remains with you though is when Amy sternly breaks it to Laurie that marriage is an economic proposition for women and Pugh does it so bloody well.

Many may find, Gerwig's decision to jump between timelines strange but it actually makes the film stand out against the rest of the adaptations. It truly shows how childhood shapes you up and reflects in the decisions you make as an adult. It also makes us fall in love with their imperfections as they transform over time. One of the gut-wrenching scenes that shuttles between past and present in an exact deja-vu moment involving Jo and Beth is sure to leave you heartbroken and that's what I'd call smart direction. For a story that is known and has been read by generations, Gerwig manages to bring freshness without touching the original text but merely opening up the themes in a beautiful execution.

The production design is spot on and honestly with all the hustle and bustle that we live in, I loved how Gerwig transported me to the simpler times. The power of Laurie not receiving Jo's letter simply because she manages to get it out of the letterbox at the right time has so much more emotion than us trying to unsend a message. The costumes are brilliantly done and especially the purposely mismatched outfits of Jo and her constant dishevelled state convey many things about her character. The March house too looks as cosy as we imagine it in the book and especially in a scene when the girls curl up to their mother as they read their father's letter who's serving in the army, it's like Alcott's world just comes alive.

Gerwig's strength is also her stellar cast. Ronan and Pugh are absolute stunners and add that with her Ladybird alumni Timothee Chalamet, who yet again impresses with his solid act. Chalamet and Ronan's chemistry is brilliant only because it looks extremely natural. Laura Dern too surely knows how to shine in supporting roles and while it must have been hard to top Susan Sarandon's act from the 1994 adaptation, the actress does it beautifully. Watch out for an excellent scene between her and Jo (Ronan) as they discuss Jo's ambitions having an effect on her relationships. The scene also has Ronan delivering a beautiful monologue on being tired of hearing that women are only meant to fall in love and settle down but also that she's extremely lonely whilst chasing her dream. Jo's dilemma echoes with many women today who fear to lose their voice in matrimony. Although one of Gerwig's most ambitious decision with this film is that she rejigs the actual climax of the book to a much more fitting one not only for current times but also to honour Alcott's wishes who would have wanted nothing more than this 150 years ago. Academy Nominated 'Little Women' to Release in India Soon.

Check Out the Trailer of Little Women:

French composer Alexandre Desplat has composed the score for the film and it is fitting for the lovely 1800s without being too melancholic or too Mozarty. Beth doesn't have too much to say vocally but Desplat makes sure that her piano leads us into her character.

Greta Gerwig's Little Women is an intelligent adaptation that revels in the beauty of its author Louisa May Alcott's ahead of its time views. It's like Gerwig hopes to give Alcott the sigh of relief that her work finally speaks about feminism the way she wanted it to minus all the fluff.  While I went into this hoping to be stunned by Saoirse Ronan's Jo, I came out in love with Florence Pugh's Amy much more than I expected.  Little Women is smart, sensitive and a cleverly crafted adaptation for our times.

(The above story first appeared on LatestLY on Feb 06, 2020 10:07 AM IST. For more news and updates on politics, world, sports, entertainment and lifestyle, log on to our website latestly.com).