Marvel's The Falcon and the Winter Soldier and WandaVision's Premiere on Disney+ Gets Delayed Amid COVID-19 Pandemic?

Marvel's The Falcon and the Winter Soldier and WandaVision's premiere on Disney+ may get delayed considering their teams still have to wrap their shootings. 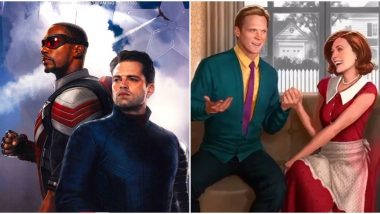 The Falcon and the Winter Soldier and WandaVision (Photo Credits: Instagram)

While Disney has already announced new release dates for their upcoming superhero projects, starting with Scarlett Johansson's Black Widow, the studio is also planning to delay its upcoming series. Disney had earlier announced its promising list of superhero series that included WandaVision, The Falcon and the Winter Soldier and Loki. While they were supposed to premiere this year, the studio has now apparently decided to push them till 2021. An official confirmation on the same is still awaited but certain Hollywood media outlets insist the decision to delay their release has already been taken. The Falcon and the Winter Soldier Actor Anthony Mackie Reveals Why His Superhero Series Will Feel Like a Six-Hour Long Marvel Movie.

Elizabeth Olsen and Paul Bettany's superhero series was earlier scheduled to hit Disney+ in late 2020. However, as per new reports in The Hollywood Reporter, it has been delayed to Spring 2021 alongside Loki. While its shooting was wrapped before the pandemic and the post-production work was supposed to resume this month, there were few re-shoots needed and the same will now take time considering the situation all over. The series is extremely crucial for the future of Marvel as it ultimately connects itself to Benedict Cumberbatch's Doctor Strange and the Multiverse of Madness.

Meanwhile, Anthony Mackie and Sebastian Stan's The Falcon and the Winter Soldier was earlier supposed to premiere in August 2020. However, as per reports in Deadline, since their shooting is still incomplete there's no way the makers would be able to retain their original release date. The series is also not on Disney+’s new list of next month premieres. While the show had received permission to resume its shooting in Europe recently, they will still take some time to wrap it and then start working on its post-production. Avengers: Endgame Actor Anthony Mackie aka Falcon Questions Marvel's Lack of Diversity in the Crew That Works in their Movies.

With no official confirmation, the new release dates of these series are still awaited.

(The above story first appeared on LatestLY on Jul 18, 2020 03:03 PM IST. For more news and updates on politics, world, sports, entertainment and lifestyle, log on to our website latestly.com).