Moon Knight: Oscar Isaac Confirmed As the Marvel Superhero by the Disney+ Series' Cinematographer in His Instagram Post!

Moon Knight's cinematographer Gregory Middleton in his latest Instagram post made a huge revelation that the Guatemalan-born American actor Oscar Isaac is the lead star of the upcoming series. Yes, he is the new marvel superhero. Have a look! 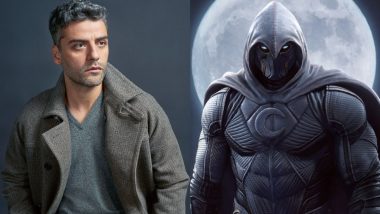 It's official, as Canadian cinematographer Gregory Middleton in his latest Instagram post made two big revelations. One - that he is involved in the Marvel Studios' Moon Knight and second - that Guatemalan-born American actor Oscar Isaac is the lead star of the upcoming series. Yes, you heard that right! In his post, Gregory confirmed these two developments and also shared the costumey look of the character from Marvel Comics. Well, this is huge news for all Marvel fans for sure. Oscar Isaac in Talks to Star in Moon Knight at Disney+.

However, a closer look at the post and you'll know that it also mentions the location Budapest, Hungary. This means that the earlier rumours about the filming of the show in that location was indeed true. "Who says cinematographers worry about white costumes! ... not if they are complex characters played by an amazing performer like @officialoscarrisaac,: a part of the post read. Before Oscar Isaac in Moon Knight, These Actors Have Appeared in Both MCU and X-Men Franchises.

Check Out It Below:

Gregory also thanked director Mohamed Diab for considering and taking him on board. Earlier, Isaac's name had popped for the Moon Knight's role, however, nothing was confirmed even at the Marvel Studios during Disney Investor Day unlike Ms. Marvel star Iman Vellani and She-Hulk star Tatiana Maslany. All that being said, Oscar Isaac, it is! How excited are you? Tell us in the comment section below. Stay tuned!

(The above story first appeared on LatestLY on Jan 07, 2021 04:51 PM IST. For more news and updates on politics, world, sports, entertainment and lifestyle, log on to our website latestly.com).